Good and Bad News from Glorantha

First the “bad news” (suppose it could be good news depending on your perspective). It looks like Glorantha's Second Age is coming to an end...at least in its Mongoose incarnation.
In a recent announcement Mongoose stated:

We have recently announced that Mongoose and Issaries have mutually decided to part ways which, on the face of things, means no more RuneQuest and Glorantha (at least, from us). However, Mongoose retains ownership of the (frankly, absolutely cracking) core rules system which we intend to keep as our central fantasy roleplaying game mechanics. We will therefore be republishing the current RuneQuest II core rules as the Wayfarer rules system (as Traveller covers science fiction, Wayfarer seemed the logical choice for fantasy!).

Sounds too like the designer of MQII Loz, aka Lawrence Whitaker, is jumping ship to work with Moon Design Productions (the current purveyors of the more traditional Third Age Glorantha stuff). Whitaker's project for Moon Design is to design a supplement around the notorious anti-hero Harreck the Beserk in which players will "join Harrek as he sails around the world, sacking cities and pillaging them, fighting gods and stealing magical secrets, breaking ancient kingdoms and making new empires." Now that's unabashedly good news in my opinion.

Where does RQ and Glorantha go from here? What's the juicy backstory here?

On a side note, it's interesting that they have chosen to co-opt one of the homebrew names being used by people working on fantasy variants of Classical Traveller. Wonder if we will see some hybridization in the future? Personally I would find a RQ-like game with some creeping Traveller mechanics—especially with its characteristic mini-games like character generation—to be something really intriguing. 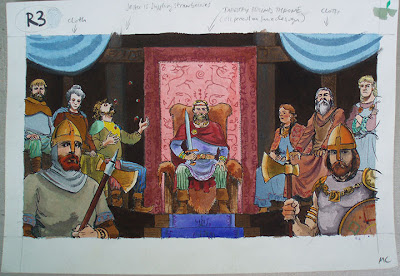 Now the “good news.” Looks like the smartphone adaption of Glorantha classic computer game King of Dragon Pass is getting closer to completion. Game designer David Dunham has said recently on his design that he was working on the last step of putting together a new manual—and opening a second round of testing.
BTW David is selling some of the gorgeous original artwork from the game here on Etsy. Your chance to get some wonderful work and help support the man driving this project. (I got the above piece titled “Rival Council” from him last week in the interest of full disclosure.)
A busy week ahead for me here as I clear out this backlog of half-baked drafts for this blog–and try and juggle an intense real-world political campaign.
Posted by Chris Kutalik at 9:54 AM