Avast Ye, We Have Winners 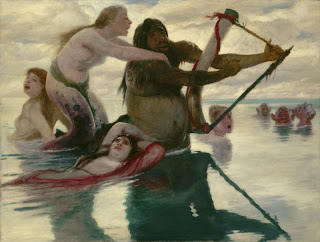 The coal black sea waits for me, me, me
The coal black sea waits forever
The waves hit the shore
Crying more, more, more
But the coal black sea waits forever
--Lou Reed, Ashes to Ashes
It's not uncommon to hear a polite lie attached to most contests: “it was so very hard to judge, because each of the contestants were so good...blah, blah, blah.”
In the case of the recent nautical challenge, it just happens to be true.
There weren't a huge amount of entries, but quality trumped quantity and I would be proud to use all of them in my own home campaign. In fact, they were so good that I found myself pondering--not for the first time--a whole other tangential, but provocative question: can “crowdsourcing” overtake professional game designers in range, quality, and depth of imagination in this decade?
But that is a post for later, let's have my lovely assistant bring out the envelopes in the meanwhile.
A drum roll please...

Best Weird Ship:
Trey with Moon’s Rake
“Of course, the Selenites are long dead and the lunar oceans they once sailed are dust, but ghosts of these mariners sail forth on the moonlight, down to the seas of Earth. The ghost seamen and their vessel appear only as shadows to the naked eye, but in the moonlight reflected on the water they appear as they were in life--delicate-limbed, large-eyed beings (at once reminiscent of elves and insects) in the Moon’s Rake--a vessel like a sleek catamaran as big as a sloop-of-war with eccentricities of design as fanciful as any royal pleasure barge. Sometimes they come to trade, exchanging strange tear-shaped emeralds (which fade to naught with the coming dawn) for trinkets that strike their fancy. Other times they engage in piracy. Their silvery cutlasses draw no blood but cause pain and opium-nightmares.”
Runner Up: Needles, Kelosinel- The Mirage Ones From Daggho
Best Setting: Porky, The former Scree.
“Dread Scree, Grizzlipool, the Bearstrand - all are names for what was once a small Scraper outpost on the west-facing slopes of Stopover, a large mountainous landmass lying deep in temperate waters. The slopes are well watered and an evergreen forest runs down through mists from the high tops, undulating over rocky foothills to the water's edge, dark and silent. The streams were once alive with fish, but now trickle silted and stagnant, while the shrouded glades fester, devoid of birdsong and calls.

The town itself is located on overgrown rock debris in the shelter of a former glacial valley, overlooking a natural harbour sheltered by cliffs. Its ancient drystone dwellings stand alongside timber lodges of varying age and design, the rot and creepers suggesting generations of occupation, perhaps by more peoples than just the Scrapers; for the Scrapers follow the flocks and their guano and seem not to stay long in any one place. The square, boardwalks and quays are empty, tumbledown in appearance.

The visitors who put ashore here are most often those desperate for shelter or water, or men and creatures with something to hide - or those who have never heard the stories; they are perhaps drawn by the odd-hued smoke rising from the boulders at the feet of the northern cliffs. Many believe they will find a small trading post, market for wares and a warm bed. Others understand what the smoke represents and seek this knowingly...”
[More here]
Best Critter:
Jeremy Duncan, Spawn of Yash-Kunag the Many-Toothed
“Every year, the port town of Galbaruc holds the Feast of the Great Culling, and the town's population swells to over four times its normal size. Innkeepers, hoteliers, and any citizen with so much as a spare broom closet raise their rates to an astonishing degree, but seasoned travelers have learned by now not to haggle, grateful for even the most modest accommodation for the 12 days of the Feast. Galbaruc looks out on the Bay of Maidens, and it is in these waters that Yash-Kunag the Many-Toothed makes her annual trek to birth her young. This enormous, immeasurably ancient sea-creature, whose massive form has never been reliably set down, is worshiped as a goddess by the inhabitants of much of the surrounding coasts.

She is seen as the living embodiment of the sea, in all its bounty, danger, and pitilessness. Local artisans most commonly depict her as a humanoid female, with generously- proportioned hips, pendulous breasts over which hang garlands of seaweed and coral, with a skirt made from the lashed-together bodies of dead men, and topped with a monstrous shark's head.

In all, she will birth many thousands of young over the next ten days, though a tiny fraction of that number survive to adulthood. The larger, faster, and stronger spawn will devour their brothers and sisters in a frenzy of hunger. Others will be picked off, in turn, by other sea creatures, which are always at hand in the waters surrounding the bay to pounce on any godling foolish enough to stray out into the greater depths...]
[More here]
Truly great stuff. All copyrights are, of course, held by the entrant.
All contestants should drop me a line at kutalik at gmail dot com to talk prizes (a choice of books).
Posted by Chris Kutalik at 11:10 AM

Labels: call of the sea, contests