I do not have a bad opinion of doubt. I think doubt has been a factor in the movement of history. I have grown to appreciate doubt more and more and, at the same time, to distrust those companeros who only offer certainty. They seem too much like the wooden men which the Popol Vuh in Mayan mythology describes as one of the mistakes the gods made when they attempted to create man and didn't know how to construct him and finally they made him out of corn and he came out alright. But one of those attempts consisted of creating him out of wood.
The wooden man was just like a man except that no blood ran through his veins; he had no spirit or courage and didn't speak a word. I believe he had nothing to say because he had no courage and therefore was never discouraged. The proof that one has courage lies in the fact that one can be discouraged.
And the proof that one can arrive at certainties that are truly capable of transforming reality lies in the ability to entertain fertile doubts before arriving at certainty; doubts that buzz around in one's head, one's conscience, one's heart, in the imagination, like tenacious flies. We need neither fear doubt nor discouragement: they are the proof that our endeavors are human.
--Eduardo Galeano 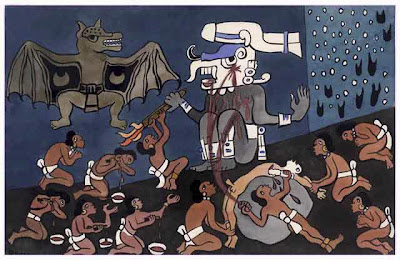 Warning: wool gathering ahead, if you want more of the game-oriented post, hop back over to yesterday's contest or wait around for the next post—after I have exorcised a few inner demons.
This started as a reply to Limpey's well-written comment here about why he felt like he needed to pull the plug on Aldeboran. A comment he sadly deleted a few moments ago. I then noticed that Alexis today has had some grappling with the “why continue” question (though of an entirely different flavor) and I gave into the urge to lay down the other posts I have been working on for a few more minutes.
I understand too well the cost/benefit dilemma around closing up shop. I understand because I have those moments where the doubts buzz like flies too. Where the volume on the self-talk gets so loud that its hard to hear anything else. Where the perennial, check-in question “why blog?” on an occasion becomes less of an affirmation.
I have to admit that I have had at least a few deeply questioning moments in the last three months too--mostly on the days when real-life goals and activity just seem to large to warrant this blog sideline. Where the ledger book just seems too lopsided in the red for something ostensibly a leisure activity.

Where the simple, direct, immediate pay-off of running my tabletop game, seems much more the point of it all then the thinking, dreaming, and writing about such activity. (And yes, yesterday, the 2nd anniversary of the San Antonio HC campaign did indeed rock.)
Taking issue with my over-emphasis on escapism in our gaming the other day, DH Boggs said here that, “escapism, while a very real feature/attraction of fictional worlds, is not the only, and perhaps not even the major compulsion. Fictional worlds are dreams, and like dreams, they allow us to recycle our thoughts, push our boundaries, 'practice' our ideas, and reach toward experiences we hope will round us, grow us, satisfy us. and entertain us all at once.”
Though I didn't say as much at the time, it was well put and pointed to why the thinking and dreaming are worthy of pushing through the doubts and discouragement. Our dreams can be worth struggling through and for.
Worth pushing aside the detractors both external—and closer to home. Worth spending months pounding keys or plugging away at a personal project; or worth just reaching out and finding like-minded people to sit around a table and roll funny dice with.
Posted by Chris Kutalik at 1:43 PM