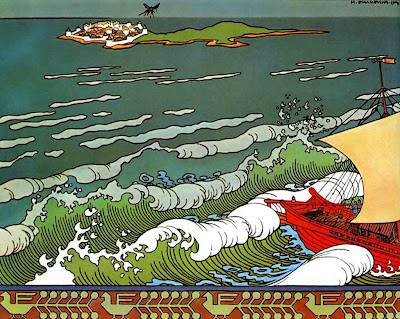 Heading back today to a place dominated by the caress of the sea has me thinking again about future campaign plans for shipboard action. The closer it gets to boarding that plane, the more my daydreams seem to be taking over.
(And yes, HC players, you may be facing a related choice in the hunt for a certain seven-parted artifact crafted by the Wind Dukes of Aaqa.)
The last round of suggestions from you readers was extremely helpful in drumming up some good sources. Sifting through the pieces I want to introduce helped me figure out the themes I wanted—and didn't want—included in the campaign extension.
Any further help on pinpointing gaming and historical sources that relate to my wish list are appreciated in advance again.
What's Out:
Age of Sail Anachronism. I know some of you are going to throw back how much that D&D is a gobbly-gook mess of technologies and cultures. It's undeniably true to an extent, but I would still contend there is a very large heaping portion of implied setting that is roughly Northern Europe from about 1300-1490 (Late Middle Ages to Early Renaissance which has enough rapid change in there to be a mess). 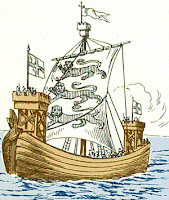 Thus an anachronism I find deeply unsatisfying is the near-constant use in D&D-oriented products of ships from fairly late in the Age of Sail (late 16th-19th century).

Ship plans and illustrations in adventures or settings invariably featured galleons, barques, even 18th century sloops and frigates and rare to never cogs, knarrs, dromons, caravels, and carracks. (Which is strange because many of the actual rules, the first ed. DMG in particular, do get it mostly right).
I want ships that are as cumbersome, crude, and fragile as at least those of the implied era of D&D. I want the danger of straying too far from the comfort environs of a coastline or familiar sea lane to be real and present dangers.
Accurate Charts. Nautical charts have a long history in the real world, and were frequently much more accurate than their mostly symbolic land map counterparts. Still there were large scale inaccuracies and fantastic embellishments in the real world maps, ever a lover of fog of war and incomplete knowledge I want the same for the campaign. Perfect Navigation. We have rules to model getting lost on land, but sea-based travel outside of certain dangers is boringly reliable (pardon my unintentional pun). Sure we have scads of rules for random storms, encounters, ship-to-ship combat, and wind strength even, but nothing for a simple notion like being blown off-course or having to tack away far from an intended vector to catch wind.
Which is odd if you come to think of it because those curve-balls are such a heavy staple of sea-based adventure tales from the Odyssey to today. The mysterious island found after weathering a squall; the pulling into an exotic port on a distant shore; etc.: all those tropes are crying out for a sub-system, besides deus ex machina, that makes it happen. 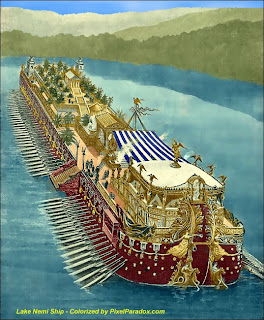 What's In:
Ships of the Weird. Glaring anachronism is out, but so is a direct mapping to the Late Middle Ages. I definitely want a higher degree of verisimilitude (dare I utter that nasty word, simulation?) with the game mechanics, but I want some healthy doses of the strange and fantastical.
In particular I want to have room for a bizarre array of vessels floating my seas alongside the more familiar medieval-era ships: great golden domed, onion-turreted barges; mammoth nine-masted treasure junks; xebecs manned by djinns and the like.. 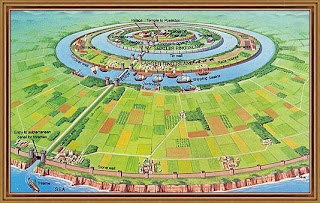 Each Mile Sailed Brings You Farther From the Known. I want each place they let the anchor down to be something very different from what they encounter back home on land—and I want that something to gets stranger the further they stray from known shores. Each port to have a distinct flavor, each land to contain more of the inexplicable.
I also want an array of less-typical locales: underwater domes, floating islands, and all the rest of the works.
There's more but I'm running out of time in today's daydreams. Maybe more come Mexico way...
Posted by Chris Kutalik at 2:55 PM

Labels: call of the sea