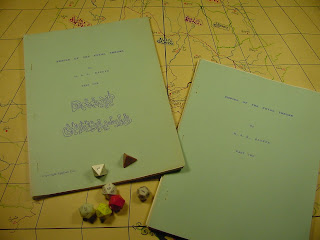 Big breaking news for Tekumel lovers: the eminent publication of the original Empire of the Petal Throne (the playtest version before the TSR-mandated publication changes) ain't just a sexy rumor. It's being released by the Tekumel Foundation in PDF on RPGNow and DriveThruRPG shortly.

According to Victor Raymond of the Foundation "there are some subtle and some not-so-subtle differences between it and the published version from TSR." The price is not yet set, but should be "under $20."

Above is "Mimeo EPT" pictured with one of M.A.R. Barker's original campaign maps. Click to enlarge and check out the Tsolyani map inscriptions. The Foundation is discussing how best to release the maps to the public.