A Hardcore Medievalist RPG of Our Own 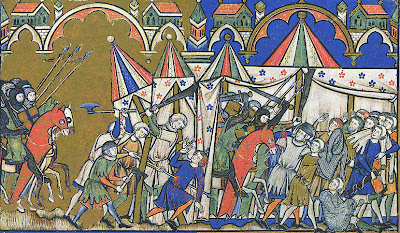 Like most of my fool gaming projects, it started so casually. Restless on leave, I threw out on Google Plus the idle thought that I was suffering through a perverse, masochistic urge to play a hardcore medievalist rpg like first edition Chivalry & Sorcery or Harnmaster.

For some reason the resulting discussion just clicked something in my head and low and somewhere in there it morphed into “let's make a game.” I trotted out a wish list of design goals for a dream game:
1. Low-to-no magic rpg. Magic and fantasy elements are rare and wondrous or terrifying.
2. Set roughly from 1190-1250 in a Northwestern Europe, but can support low fantasy or semi-historical fictional settings that are similar.
3. BRP-like percentile game as a baseline but with simple mechanics that are custom fit for the period.
4. Game feel inspirations: real world history, Averoigne/Jurgen weirdness and a splash of Howard Pyle-like romanticism.
5. Indirect "magic" (saintly, alchemy, sorcery/summoning, and herbal) that is well-researched and fits into the workings of the medieval mind.
6. Folklore and legends are often "real". Prester John may well live at the edge of the world in a land filled with strange wonders. The black hound may indeed hunt the moors and Woodwoses in the deep dark recesses of the forest. Faith and folklore have real weight.
7. Background, institutions and social class matter, but opportunity through social chaos/adventuring.
8. Interesting, painless chargen (career based with clear easy choices).

A mad writing rush of two weeks opened up with heavy-lifting help from Evan from In Places Deep  and Mike from Sword+1 and other mensch in our DIY corner or the hobby. Forty manuscript pages later and “Medieval Hack” (a working title) was a-born.

A good many ideas I've been long harboring for character generation minigames were sharped and found a home, you can guide a character through a large range of childhood class backgrounds along a vocation path of almost 50 different realistic vocations (with lots of strange events and related character development along the way). Long-tinkered, beancounting-minimal domain-level rules are finding a place too.

While we have a lot more tightening up and thinking out to for our evolving-bottom game, the punchline is we already had enough in place to start the real fun: hot-housing in several play-test mini-campaigns on Google Plus hangouts.

Evan is running one such game in the Languedouc region in the late-12th century. I'm running two sessions a week now of a mini-campaign that ports elements of 13th century Brittany into the strife-torn South Ulfland setting dress of Jack Vance's Lyonesse trilogy (see here for the full campaign description).

If you are interested in the game—and more importantly want to drop in and swing a virtual sword in one of the playtests--drop me a line. Half the fun is building a game organically from the bottom up with the discerning and devious minds of our wee hobby.
Posted by Chris Kutalik at 10:49 AM