Yesterday I pulled back the current on my recent medievalist game project. I mentioned that I was running a mini-campaign that "ports elements of 13th century Brittany into the strife-torn South Ulfland setting dress of Jack Vance's Lyonesse trilogy."

For spectators and those interested in getting into the playing pool for one of the Google Plus playtest slots (or face-to-face if you fancy a drive to San Antonio), here's the background run down and starting situation on my little barony. 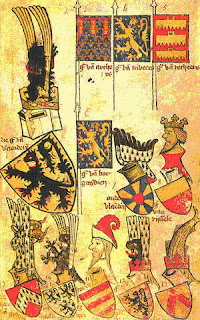 Local Male Names
Local Female Names
Medieval Nicknames (note such wonderful entries as “Catherine de' Medici Jezebel, the Barren Wife, the Black Queen, the Eclipsed Consort, the Italian Duchess Without a Duchy, the Maggot from Italy's Tomb, the Merchant's Daughter, the Monstrous Regiment of Women, the Mother of the Modern High-Heeled Shoe”)

News
Hoel, Lord Bodwy’s last remaining son was found a fortnight ago nailed to the old Roman watchtower two hundred paces from the boundary stones of Lord Govran’s demense. His corpse was so riddled with arrows that it was difficult to identify the teen heir. Lord Bodwy remains bedridden and despondent to this day. Sir Paol, Bodwy’s castellan, is looking for “rough men” to help revenge the honor of the baron.

The Hot Fair of Maure will begin next week. Already the village is packing in wine merchants, harlots, pedlars, vinters, thieves and other ne'er do wells.

Sir Gralon and Sir Taran, twin nephews of Bodwy’s currently serving in the court of King Gax in Xouges are said to be on the road to Fian Gosse. Their mutually-contested status as heirs to the barony surely is prompting their sudden sense of homesickness.

Sir Paol has offered a one Libra (240d) reward for the slaying of the dreaded Hound of Blacken Moor. A shepherd had his throat torn out near the moors just a night ago.

Sir Kavan, the more martial of Bodwy’s bannerets, is looking for the fleet of foot and stout of arm to help in a return of his prize bull from a local banneret. Interested parties should seek him at Three-Pines Hall.

Jakez the Woodward has been breathlessly spreading in the village a chilling tale of coming upon a black rock altar deep in the center of Kaugh Forest. The blood staining in it was hot and fresh to the touch and he could hear the howls of Hell itself when he lifted his hand. The tale grows in the telling.

NPCs of Note
Lord Bodwy, the petty baron. Bed-ridden and despondent since the deaths of his three sons

Sir Ranulf “the Cuckolded” (weak chinned and fat) and his wife Ysabel of Konche, raven-haired beauty of an “amazon”. Bodwy’s other banneret.

Surrounding Baronies:
Lord Govran, sadistic fucker who holds the barony of Caroth to the northwest.

Lady Mebille of Gelsme. Stewarding the barony to the south for her son. Eerily depopulated fief with bramble-covered ruined villages and wood-choked fields. Dark rumors abound about the lady.

Maure
Large village of around 750 that holds a royal market charter (and is thus growing into a town). Three mills, a smithy, two weavers, a tannery and most recently Kernun’s Antler, an inn.

Three Pine Hall
Venerable oak-trunk manor house known for the three massive ancient pines in its courtyard thought to have once been used in the worship of a pagan god.

Abbey of St. Christopher the Lesser.
Premonstratensian abbey run by the Abbot Fransez the Fat, a venal and grasping man.

Molac
Sinister little hamlet of around 50 herdsmen near Bracken Moor.