Campaign Hooks and News for the Ruinscrawl 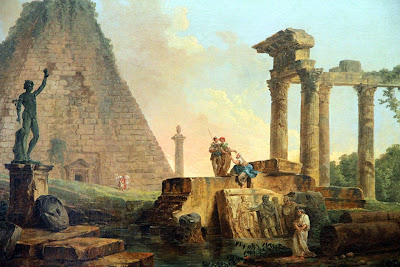 Putting my money where my proverbial mouth is I have been busily pimping out a ruinscrawl (the second part of the series will be posted tomorrow). Fortunately the players have been headquartered in the half-ruined metropolis of Kezmarok, I can shoehorn in such adventures a scant and convenient half-mile from their own base of operation (a convent itself a rehabbed ruin).

Much of High Kezmarok (that's the northern, elevated part of the city on the crappy players map below) is sparsely inhabited at best, with whole sections completely given over to the various stages of ruination I wrote about the other day.

While I am limiting the pointcrawl portion to only the Farwest ward mentioned in the hooks below for the time being, the large scale of the city (a massiveness compounded by the vertical expansiveness of the undercity beneath its streets) still gives me a fairly large area to work my map with: a space roughly 500 yards by 700 yards. Many of the boulevards marked on the map will be translated directly into “double line” connections for the map. The 100-yard squares (you may be able to faintly discern if you squint really hard) translate nicely into discrete points.
F 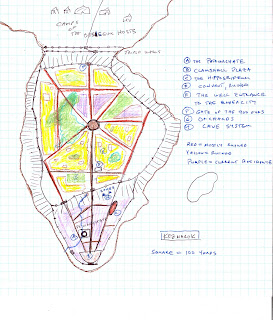 But now the news...
Noting continuing fears of High Kezmarok's shabby gentility and licensed squatter leagues that the magnificent ruined piles of Farwest ward have slipped irrevocably into the Weird, work crews have finished construction of retaining walls blocking access to the ward's radials. Resting a hand on the eight-foot-high recycled-stone barricade at the dedication ceremony, the Lord Warden assured citizens that the “wearers of skin, night hags, demi-liches,  and other such otherworldy riff-raff will now be kept at bay.”

Defiantly taking note of the official abandonment of Farwest, Zax, the sybarite heir of the Despot of Ma'arb, has posted a 2000 gold sun bounty for anyone “man--or desperate--enough” to escort his ruins-porn party to the Great Aviary looming over the center of that benighted district.

The newly-anointed Decade-King Uloysalik IX continues to create a furrowing of brows and a clucking of nervous tongues throughout the hostel-salons of Kezmarok. Declining to retreat to the customary seclusion of his predecessors and wait out a gloriously decadent 10-year revelry before his inevitable ritual deposement (and blinding), the new ceremonial head of state has cheekily gone as far as to issue wallposter proclamations.

Among the king's first announcements was a celebratory festival tomorrow honoring the heroes and heroines of the Battle of the Twelve Guns, the decisive engagement that is “so last year” in the minds of the fickle Kezmaroki crowd. Citing costs of repairing the outer wall, reworking the attendant mountains of paperwork, and of course the annual goal of keeping high municipal officials salaries “competitive”, the Council of Autarchs has met the proclamation with an “alternative, supplementary budget.” The new budget generously resites the festival grounds from the Plaza of the Five Banners and main radial boulevards to the Adamantine Room, a cozy chamber secured from assailants under the palace scullery and behind a locked back staircase.

To date the other wallposters that bear the albino catoblepas seal of the monarch have been general exhortations like "the Turko Fey are only great because we lie on our knees, ARISE!" and a vague program for the "aesthetic and martial" training of adolescent age natives. All the posters are illustrated in vivid colors in a style we would call "agitprop."

Posted by Chris Kutalik at 4:42 PM