Riots, Carracks, Celestial Plays and Rolling Back the Weird 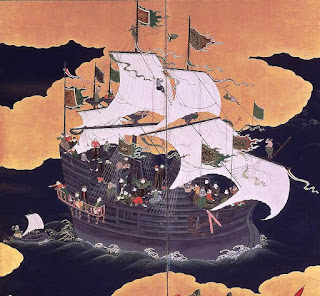 And now the News...
“Ole Wampus” Bartol, captain of the Canton-flagged carrack _The Ocular Bat_, was overheard in a hu'uz hallucinogenic stupor roaring—between exclamations of “everything is so mauve”--about how a Storm-Child gale forced his ship dangerously close to the Weird on the Feral Shore [the once-populated coast between Kezmarok and the Hill Cantons cleanly wiped out of existence by the Turko Fey]. Bracing for the curtain of electric feeling of crossing over—and the near certainty of “monsters a-wondering” that seem to pop from nowhere to the clack of cosmic dice in that fell zone—they were shocked to feel only the gusting salt-winds on their back. Running close to shore for several cantonal leagues before tacking back to the deeper waters of the Persimmon Sea, the ship nary encountered the Weird once the breath of that little excursion. Though parlor regulars dismissed the story as “the mollusk-buzz talking”, details, to this humble reporter, seemed surprisingly consistent with his slightly less-inebriated crew.

Anxiety about the disturbingly activist nature of the new Decade King has been ratcheted up a notch this week's *monarchist riot along the gloriously-misnamed Scintillating Avenue of Strident Strumpetry*. A peaceable gathering of *For the Children*, a program beneficently sponsored and funded by the Palace of Affairs Domestic to provide silk wimples and chitons to disadvantaged children of gentility come down in the world, was set upon by rough-handed men with quarterstaves shouting “blood for the Decade King.” The mob then marched down the avenue seemingly at random pulling squatters from the row-towers, shaving half their heads, and painting dwarven penis runes on their bellies.

Our world is one of constant flux, but one thing endures is the *Kiiros Regatta of Ma'arb*. Originating in that Southlands nation's time as a Kezmaroki possession, the biennial naval parade and race is just as reliably dominated by the ever-impressive (and ever-financially ruinous) entry of Ma'arb's preeminent figure, the Despot. The diamond flash of gilded mirrors, blood-curdling war-yells of amazon maidens, and ear-shattering petard-explosions of his “thunder-dromon” of two years back, a sight that many observers could not be exceeded, was in fact topped by the great golden domed, onion-towered pleasure barge that came gliding into the harbor this year. A stream of superlative statements has issued from jealous fixtures of Kezmaroki great-hostel parlors ever since.

Speaking of hostel parlor talk, rumors have been spreading of a “celestial play” to be presented in the underground quarters of esteemed autarch *Drasko the Debauched*. Of course only a high select audience will be on hand to witness such an undoubtedly magnificent display of theatrical delight. 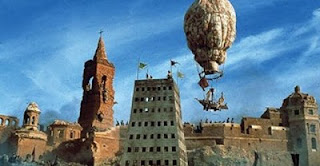 Grooms at The Fesian's Stables (where business has been hopping in recent weeks due to the influx of kozak mercenaries as of late) are spreading a tale of a great rending sound and sudden appearance of a dust cloud from just beyond the new retaining wall on the southeast side of Farwest yesterday. “There was nothing particularly satirical or obscurely colorful about it,” stated one of the dung-smelling witnesses to the incident.”

The wild rumor that spread last night like a sub-world sirocco through the bonders of the Little Cantons has been confirmed by officials at the municipal palace this morning—for the first time in five centuries *the Turko Fey have inexplicably moved away from the outer walls of Kezmarok*. Half-ogres and human slaves were seen striking the great silk pavilions of the besiegers and hastily moving said tents a half-mile back to a new position around the ridgeline of the Vovoli Gardens. A thin grey line of distant figures there—that many from the walls believe to the be the Turko-Fey themselves—was observed watching the proceedings from that height. The news has been greeted with wild enthusiasm from the northron mercenaries and a jaded shrug by native Kezmarokis.

The small crowd that gathered to hear the Decade King's bizarre attempt at oratory last week were disappointed (perhaps relieved) that the speech was drowned in a suddenly frentic bit of building activity from work crews sent by the Autarchs to renovate the crumbling palace exterior. What's more  the intricate webbing of the new scaffolding encasing the building ensured that only the forehead and ornamental morion of the monarch was seen by the crowds below.