By This Axe Skirmish Rules Ready for Playtesting 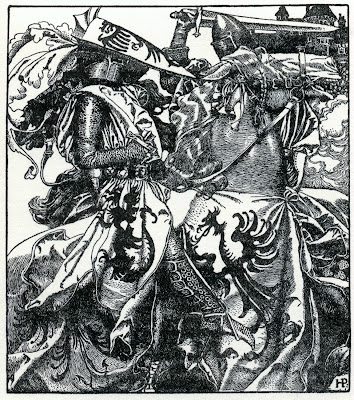 Last week I promised that I would be releasing both a Skirmish and Campaign supplements as free PDFs for folks picking up copies of my mass battle rules By This Axe. The good news is that that work is steadily on track. A working draft of the skirmish rules are reasonably complete and poised for playtesting.

Basically I have taken the mini-game that handles duels in the larger battle system between strutting champions and extrapolated a dice-pool melee system that allows you to make individual tactical choices for warriors each combat turn. The scale is downshifted from the 1:5 and 1:20 system of the battle rules to a 1:1, unitless scale (though complemented by a simple command and control system). They seem to work reasonably well in my solo-testing for forces of 5-25 figures a side, but you know we will see as we get further in.


Anywho if you have picked up a copy of BTA (the draft rules will make very little sense if you don't have a copy) and are interested in playtesting or just giving me feedback drop me a line at kutalik at the gmail dot com and I will pleased as the proverbial punch to send you a copy of the draft.
Posted by Chris Kutalik at 1:02 PM