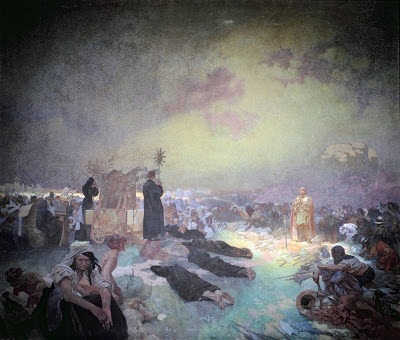 One for the “showing my work” file, some of the inspiration points that went into the religion and cosmology series. Another post on the terrifying inimical gods of the Anti-Cantons may be in the making.

Poul Anderson's The Broken Sword and Three Hearts and Three Lions, Douglas Bachmann's Dragon article in #40 (the Weird and its cosmic juxtaposition to human civilization, the association of humanity with Law, the waxing/waning of gods being tied to the amount of human worship and the reduction of “Faerie”)

Hussites (and Taborites), Mormon feminist views on the Heavenly Mother, William Blake's poetic mythology around the Triple Goddess (The Celestial Lady and her secret heretical societies)

M.A.R Barker's Create a Religion In Your Spare Time for Fun and Profit and Mitlanyal (general inspiration, the concept of distinct aspects for gods)