Religion and the Hill Cantons Part Four: The Hero-Cult of Adalfuns 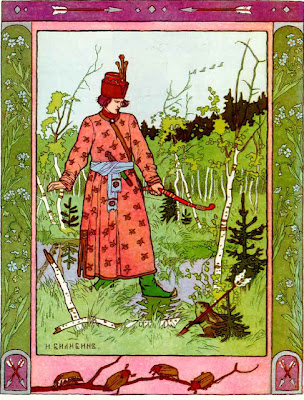 Hero-cults of the Sun Lord play an important role in the confusing panorama of religious life of the Solarity-holding people of Zem (see this post for background). The cult of Adalfuns the Choate is one such aspect held dear by even the heretically-minded in the Hill Cantons.

The Chant of Adalfuns the 37th Aspect of our Sun Lord Puissant
In the Free City (then, as now, a misnomer) of Aufhebensplota in the August Year of the Noxal Surrender (or 41,069) was born the hero Adalfuns, the love child of the cow maiden Welga and our most beloved and virile of divine presences, the Sun Lord--who is also by way of the shared godhead also Adalfuns.

Though his adolescent years were spent happily if rowdily knocking the jaunty caps off of local dilettantes and earning the inexplicable nickname of “Wonder Hans” with the local maidens, the wanderlust that runs raging in his divine veins took his course and he struck out from home for the Path of Heroes: helping other beings in shuffling their mortal coils and the carting away of their possessions.

So it came to pass that Adalfuns entered the Hill Cantons in search of the Horned Oracle. Crossing the River Trvna on the road to Ostrovo he was startled to hear a great stirring of the water behind. Glancing over his magnificently broad shoulder he saw the hairy, horned mass of the bukavac hovering mid-air.

“What ho, bukavac?' Adalfuns cried. “why do you make ready to leap upon my rippled and ample back?”

“I lack sustenance and wish to dine upon the delectable substance called man-fat,” answered the bukavac reasonably.

“Surely my toned and muscular form would provide poor and gamey fare to your refined, if monstrous palate.”

“Ah but that is where we differ, oh man-flesh on the foot,” answered the bukavac, “I have found delight in the prodigious marbling of a well-seasoned fighting man.”

“I will happily share in my man-fat, but for a contest of logical conundrums. If you win, you crush beneath your mass and consume the entirety of my body. If I win, I shall lop off my right arm and present it to you. In either case your avaricious belly finds nourishment.”

“While I take exception to the libelous characterization of my abdomen, I agree to such a contest.”

As Adalfuns began his exposition his dextrous hands sought out unseen contents from his magic backpack (of which it is said that the desired item always laid on top).

“Baromil wears a scarlet doublet on Sunlorday, Jirimil wears a black one on Blackgoatday and Alena wears a woolen wimple twice a week. Timosz is wearing a burgonet. What day of the week is it?”

“That make entirely no sense,” said the bukavac in an exasperated tone. “I shall make ready to leap upon your ample back.”

“Oh no, wait there is a second part,” said Adalfuns as he hurriedly and steathily whittled behind his back. “There is a blood apricot-laden cart leaving Heimotbuch traveling at four cantonal potato-leagues an hour while another such laden cart leaves Muth travelling at two leagues per hour. Where and when do the two carts meet.”

“But again...” Before the thoroughly confused and enraged bukavac could ready his banter, Adalfuns took the 10-foot sharpened stick from behind his back and thrust it into the gleaming red of the great beast.

“Sweet fuck,” said the bukavac in tremendous pain. “You have blinded and cheated me.”

“But that was exactly my point,” quipped Adalfuns in a line that sounded good on his tongue at the time, but on further reflection later seemed cheap and breezy. Whistling a saucy tune he hitched up his pack and made way to Ostrovo for a steaming pile of halushky.

A: Chaotic, Good (one of the few aspects of the Sun Lord so)
B: +1 to hit when using a piercing weapon (3), +1 to surprise if engaged in conversation with a being before combat (6).
C: Fighters, Rangers, Fey exiles from New Hampshire