Campaign News and Presenting Behind the Scene Mechanics 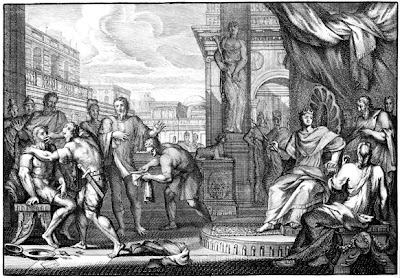 Recently I shared a few of the subsystems I was using to run the colonizing domain game-like aspects of the Feral Shore new phase of the eponymous campaign here. Today I thought I'd share how I am planning on giving life and color to those tables by interweaving with my weekly (more or less) news reports that you can typically find here if you are on Google Plus.

And now the news...
It's high summer and riot season again in Kezmarok when the Sun Lord himself gets fever drunk on the white hotness of his luminescent magnitude. Jaded connoisseurs of local politics (i.e. most of the native population) sadly opine that the usual artfully planned and executed riots by Autrach-controlled Wellsprings of the Crowd have given way to sloppy and social-destabilizing ones this year.

Why take the massive free-for-all that occurred in the Little Hill Cantons quarter last week. Why Wellsprings agitators would pick the Gravy in Beard, a renowned drinking den of backhills Pahr bonders considered sacred by Radegast followers, as a nativist attack point seemed dangerously foolish. But the shavings (romanticized artist's rendition above) and over-the-top humiliations of the tavern goers that occurred seems insane beyond measure.

Worse yet it has provoked a bona fide political crisis. Though most of the bonder mercenaries manning the walls see those old pagans as annoyingly (and stridently) pagan they are still incensed by the violation of fellow Cantonals—in their own part of the city no less! A massive “ring” meeting of the companies has been called with wild rumors of an unprecedented “strike” hanging in the air.

In other news black is again the new black. Black-dyed velvet doublets with needle-lace armbands, dark-gilded merkins, and ebon peak caps are this summer's cutting edge of fashion in both the Cantons and Kezmarok.

Meanwhile back in the mud-encased Feral Shore colony of King's Ten (which incidentally is being called Kraldeset by Pahr-speakers from the Cantons) it's been a gorgon's bull ride of a week with the camp still reeling from the sudden—and horrible—suicide of beloved sleeper-sage Pelka who was found coughing blood from the glass bottle he had apparently consumed. A rambling incoherent note left behind mentioned odd statements like “must return that bowl” and “what's the planar frequency, Kenoth?”

Still morale remains relatively high with the boost of the recent royal visit, abject fear of the camp clown enforcer, and a new ditty composed by the men that is all the rage.

Ballad of Kraldeset
Oh he's a rantin', rovin' blade,
He's a brisk and a feral lad,
Betide what may, my heart is glad,
To see my lad by Kral Stockade.

I'll sell my rock, I'll sell my reel,
My mistress and spinning wheel,
To buy my lad a doublet plaid,
A saber and pike at Kral Stockade.

Malinka, 4 hp cruel-lipped executive assistant. Whip, leather and club. Will get you to the dungeon on time for 30 suns/month compensation otherwise settles down to run an abuse salon.

Kracki the Hooded One, 3 hp, Half-Plate (AC:5), pike, nunchucks. Laughs at all your jokes. 30 suns/month if part of retinue.