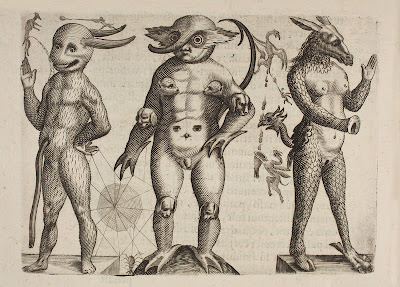 Yesterday's goofball post on the custom Reincarnation table (that I will henceforth be using in the eponymous campaign) reminded me that I have been slacking in my write-ups of the horde of custom monsters I have been using. My typical excuse is that I don't tip my hand to the players, but the qualities of many of these critters are well-known to them at this point—so here we go.

The following "poor dear" creatures are an homage to the work of late John Christopher, in particular the supremely dark, post-apocalyptic Sword of the Spirits series which I ate up with delicious pre-teen anguish. They played a starring role as relatively sympathetic NPCs in the mini-campaign “dragon hunt” sideshow that took place on two small islands far to the south of the Cantons. 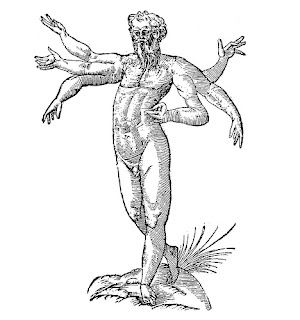 Polymufs
No. Enc: 2d6/1-100
Alignment: Chaotic (Good, Evil, Whatever)
Movement: 120’
Armor Class: variable by armor
Hit Dice: ½ (house polymuf)/1 (field polymuf)/ 2 (feral polymuf)
Attacks: 1
Damage: weapon
Save: F0/F1/F2
Morale: 6/7/10
A firm, but unfair social order greets newborns on the Southlands island of Ptuj. Plagued by two centuries of increasingly bizarre mutations among the population, the local Rada (council) long-ago issued a decree-- irrespective of family social station--that all residents would be divided into three castes on birth: (at least visibly) deformity-free “citizens” (who wear their feathered hair and pastel tunics tied over the shoulder as a sign of their superiority), the “dwarfs” (midgets who are second-class craftsmen but ostensibly free), and the enslaved “polymufs” (the visibly-deformed, semi-free underclass of the island).

While many polymufs remain cowed by the centuries of servitude, others who style themselves “polymuf and proud” have weathered the treacherous local currents and slipped off into the Weird to found “freegan” maroon colonies built around a life of hand-me-down ancient literature and communal living. Life is tough for the feral maroons, yet there is a certain panache and skill in arms that accompanies those that truly “live freegan or die.”