Here's the straight dope on the NTRPG conflab as witnessed and experienced by this humble reporter. Names have been altered to protect the identities and fragile egos of the guilty.
17:52 Friday, New Braunfels, Texas
I count off the checklist of our essentials of our expedition as we transfer the contents from Skullcrusher's Mega-Giganto truck (he reassured us on the drive back that his ownership of said truck had nothing to do with the relative size of his John Thomas) to the tidy and tight confines of Mr Brown's (aka the the “Special” Guest) Ford Focus.
Half case of rotgut bourbon. Check. Full case of funny-shaped dice. Check. Multiple bottles of gas station pinot (who would have thunk that a vintage styled after cheap plastic sandals would be so mind numbingly horrendous). Check. Stack of overly-complicated and bland 70s wargames if I have to leave a session in a huff. Check. Fire extinguisher. Check.
Loaded up we are now ready to be the neo-nerd equivalent of a cast of characters from a film about Vegas, hopefully Fear and Loathing as opposed to say Leaving Las Vegas.
20:33 Friday, Irving, Texas
Many stories of bonfires being doused by local fire departments, snarky gossip about the sexual peccadilloes of former TSR staff, and wild plans to market gamer-oriented fetish porn later we manage to arrive at the con hotel.
Manage being the operative word here as between the steadfast refusal of Mr. Brown to follow simple directions and Skullcrusher's refusal to interrupt his bourbon-fueled ranting to navigate, it was touch and go about whether we would actually make it there. I help by falling back on my time-honored tactic of mentally checking out and smiling and nodding a lot. Fortunately the distinctive architecture and straightforward highway access-road layout of suburban Dallas helped to minimize our confusion. (Is it near the strip mall with the Walmart or the one with the Chick-fil-a?)
We quickly check in and more leisurely check in with the conference organizers. Malicious Mike, one of the founding gurus, stands behind a wall of vintage who-ha at the registration fending off conversations from lurkers left and right.
Now see both Mike and his compatriot Doug of the Famed BBQ are notorious for the sheer generosity—and deep pockets—with this convention that seems to build exponentially each year (the sheer packed attendance of this year is leading them to seek a much bigger venue next year). Not only do they fund the impressive compliment of “special” guests (Erol Otus for chrissakes. Erol Otus.) and put in the countless hours of sweat equity with the logistics work, but they seem hellbent on modeling the dynamics of a Native American potlatch with their giveaway of freebies.
Nevertheless, I am amazed when I compliment Malicious Mike on his shirt and he takes it straight off his back and offers it to me. “You like it, here take it,” he says to your author. (I am only minorly disturbed when later the Famed BBQ guy offers to give me his shirt. Backrub optional). True story—more or less.

[Editor's Note: Forgot to add that here we encountered both Good Finch, owner of an unnamed game company possibly located in East Texas, who confided in us his plan to take over the industry by way of a nefarious plan to spread viral links and a Game Designer Named After an Obnoxiously-Loud Motorcycle who confirmed by way of his John Deere gimme hat that he was as much as a redneck as we were.]
Friday 21:15
Although I get a short high from the self-validation of wearing a name tag with my name printed in bold sans-serif font on it, the buzz quickly wears off and the Skullcrusher and I are off to hunt for a game to join at this late hour. The small mountains of discarded pizza boxes cluttering door entry ways and the rhythmic click-clack of dice are the first clues.
Miraculously we manage to be recruited for a late-night go at the Myth of Sisyphus game--or was that the Tower of Mythrus?, it was hard for me to note as somehow I managed to quaff ¾ of a bottle of Flip-Flop in the half hour of our arrival--a persistent and popular Con world where players keep their surviving characters between sessions. The game ringleader is Bill the Frog God Necromancer who manages to knock our socks off with his sheer apparently meth-driven (the constant sniffling gave him away) late-night gamemastering.
Rolling a character up on the spot, I wow my fellow mythmakers with a first roll of “3” in our straight 3d6 chargen. I doodle out my sheet (pictured below and above the portrait of the Skullcrusher's fighting man who was apparently pictured as a Ssu'u drawn by an Expressionist-trained kindergartner by my wine-addled mind) and promptly name him “Mongomero the Burn”. Off we go.
Five minutes in and our party of savvy, tough adventurers is nearly TPKed as we fail to put two feet in front of us properly as we walk across a log over a very narrow body of water. Fortunately later sessions will reveal me and my veteran gamer brethern to be even less competent as players then this one. 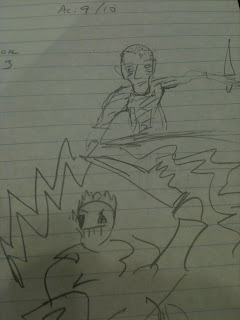 Saturday 2:47
Despite our near-fatal encounter with the stationary log we actually make it some way into the wilderness fending off a poppy field, wall of logs, and an enticing siren fond of crocodiles before realizing that grown men shouldn't be playing roleplaying games after 3 am.
Skullcrusher almost makes good on his apparent Convention goal of dying in each and every session due to senseless choices, but I am disappointed that I do not make good on my own of turning each and every conversation into an opportunity to talk about myself, my blog, and my own projects--apparently a time-honored oral tradition in older grognard circles.
Saturday 3:33
Back to the room we are drinking with free and stupid reign now. We rouse Bad Finch from the room next to us to put an end to his oh-so silly need to sleep (also coopting him from taking action against his rambunctious neighbors). Mr. Brown begs us to allow him to sleep on our couch, a decision I will regret (amongst many) later when having the housekeepers cleaning the tear stains off the couch pillows.
My own inability to pass wisdom check after wisdom check ensures that I drink enough Flip-Flop to make Saturday a day filled with People Who Talk too Loud.
Stand by for that next installment...
Posted by Chris Kutalik at 12:19 PM