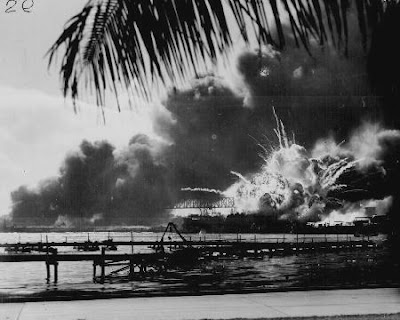 “Out in front of Schofield Barracks, there was a drainage ditch about yea wide,” my grand dad pauses the slow Texas-inflected cadence of his story to run a finger from his elbow to the tip of his finger.
“Barely wide enough to fit the whole platoon, and we were about from here to the kitchen wall over there far when the Jap planes started swoopin' in.” He points about 30 feet to the avocado-painted wall in their snug little post-war bungalow.
“But with the...” bam, bam, bam, he's rapping his knuckles on the solid oakwood surface of the table, “...of them bullets a-flyin' in rows as straight as a cornfield you find a way to be there and fit as quick as the dickens.”
I have heard this story about Pearl Harbor so many times that I can recount it myself verbatim (still can obviously decades later), but I was riveted each time he told it. It wasn't so much the vicarious titillation of the subject--the pants-crapping chaos and fear of combat that I grew up with and in--but the sheer art and love of story of the man that kept me each time.
Like a lot of working folks of his generation, my grandfather was not an educated man. In fact the realities of life on a hardscrabble farm in the Czech belt of Central Texas during the Depression meant that he would never make it to high school even—let alone drop out of it.

The family farm, that stood on a rocky crop in a great C-shaped plot around the arc of a lazy creek, was a cycle of misery. So miserable that one day my coward of a great-grandfather just left for town one day—and never came back. From early on it was a soldier's life for him.
Grand dad wasn't a stupid man though. His collar may have been blue and his neck a deep shade of red, but he was an autodidact hungry to learn about the vast range of things you encounter in a good, full life. He enjoyed books, but more loved—and mastered—the oral tradition of storytelling.
He didn't just ramble through a story, there was always a definite beginning, middle, and end. There was rising action and dramatic tension. There was color to each and every character in his story.
And there was this wonderful habit of using the environment of the place you were in to give a physical immediacy to the scene he was describing. He wouldn't say “the bull was red in color”, he would point to what I was wearing and say “it was as red as the shirt you have on”. He wouldn't say “the catfish was big”, he would ball up his fist and say, “it was as thick as my fist is round.” You had no problem at all seeing it in your mind's eye.
The relevance here?
It's no great mystery that part of the art of being a good GM is the art of mastering oral storytelling. We tend to not emphasize this fact as a correction to the excess of the so-called narrativist games, but it doesn't make it less patently obvious.
When I really feel in the zone as a GM, I find myself calling on the tradition of grandfather. Those tricks don't just become the tricks of an entertainer, but a way for me to picture it in my own head—and the clearer that picture is the easier time I have conveying “the reality” of the situation at the table.
When I jab my index finger at the dining room wall and say “that giant serpent is now from where you sit to the wall there from you” or I say “the rune-inscribed club is about as thick as my arm” I am calling on something I have learned from only one person in my life—but a tradition that probably has been with the family for centuries.
Importantly it doesn't just improve my skills as a GM when I can call on it, it touches on why this game is more than just a game at times. The game gives me a platform to keep in touch with the spirit of the man and the oral traditions of the men and women that came before him. In this post-millennium life where the vast majority of our communication is heavily mediated, it is one of the few avenues I have left to use that tradition.
Posted by Chris Kutalik at 11:20 AM