Why the Barker-Tékumel Collection is Worth Paying Attention To

What a reader should take away from M.A.R. Barker's Tékumel collection “going public” is how big--both in real, physical terms and in terms of preserving the historical record around the setting and the early days of role-playing games--this collection is.
But don't take my word for it, have a taste of what lies in the over 500 cubic feet of material busily being scanned, restored, and archived in a climate-controlled storage bay in Minnesota. Here's just a partial inventory of what Jeff Berry describes as “maybe five percent of what's there in the manuscript and document boxes”:
It's important to remember that the primary task, according to Victor Raymond of the Tékumel Foundation, in the immediate future is to preserve and make sense of the documents and artifacts. Although the Foundation is wary of over-promising in the short-term, fans of the setting and EPT are expected to see a nice range of previously-unpublished products coming down the pike (and also expect to see some follow-up here at the HC).
Fan-girl teasing out of the way, I thought readers would find parts of the recent talk I had with Jeff of interest too in helping readers parse what's going on. 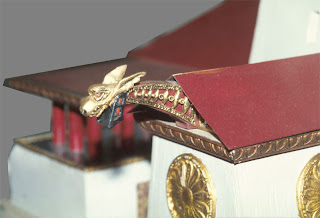 Hill Cantons: What's the backstory here? How did this massive private collection end up in the hands of the Foundation?
Jeff Berry: I think this story actually starts some years ago, at Dave Arneson's funeral. A lot of us “old hands” were there, and we had the chance to talk to Dave's family about his career and influence in the game industry and the way he himself played.
What struck me was that his daughter, Malia, didn't have much information on any of this; one of the things that she'd done was put all of Dave's photos up on poster boards for people to see and be able to tell the family what they were. I was able to tell the about the ones that Dave had taken at game conventions, as I was in a few of them, and Bob Alberti was able to tell her all about the ones Dave had taken with Prof. Barker.
One thing led to another, and we got to talking about what the Aethervox Gamers were doing to catalog and index our collection of Tékumel materials, and that we were probably going to have to incorporate as some sort of non-profit in order to be able to do mundane things like get insurance for the collection.
This got a lot of thinking going, and there have been a lot of conversations since then between the Tékumel Foundation and the Aethervoxes on matters of mutual interest; let's be honest, there's not that many Minnesota 317a corporations devoted to Tékumel out there, and it just seemed to make sense to keep in touch and compare notes.
While we do very different things, both groups share a love of Prof. Barker's astonishing creation. The primary purpose of the Tékumel Foundation is to preserve and maintain Phil's literary legacy, and the Aethervoxes to continue to run game sessions set in his world. Both groups are the heirs to large collections of artifacts and documents, so there's a natural tendency to stay in contact.
As time passed after the funeral, it became apparent that very little--if anything--had survived of either Dave Arneson's or Gary Gygax's collections of early game material. Sure, there was a lot of “stuff” that they had collected as gamers over the years, but very little of the “DNA” of their game writing and thinking has been preserved. Neither family seems to have found much in the way of original materials or documents, and I think all of us thought that this was a great loss both to the larger gaming community and to our understanding of how the modern game hobby came to be.
The Tékumel Foundation began to think very hard about how best to preserve the Professor's legacy, and some “contingency planning” was begun. The Foundation, at Phil and Ambereen's direction, started the ball rolling to get all of the legal paperwork needed to enable the Foundation as a corporate entity to manage the Professor's interests and collections.
HC: One of the things I find fascinating is the paper trail linking the Professor—through the tightly-knit speculative fiction fandom of the 50s and 60s--with some of the leading lights of Sci Fi and Swords & Sorcery literature. You mentioned the correspondence with Lin Carter and Jack Vance. What has been seen in the collection so far and what do you expect to find in there?

JB: I had hoped that Phil's early fanzines had survived; we had exhibited them at the local F/SF con in the middle 1980s, and I was hoping that they hadn't gotten tossed out in a house cleaning or something.
They are all there, as well as the program books from the 1950 World Con; lots of photos or fandom at that time, as well as many fanzines from people like Lin Carter.
I'm hoping that the Dying Earth maps that Phil did for Jack Vance are in there as well, as I mentioned. I also found a copy of Amazing Stories from 1927, and I'm sure we'll find a lot more; many of Phil's own “lost” works are there in manuscript, and as we inventory it all I expect we'll find some real gems.
There are original art works from fandom in the 1940s and 1950s, and all of this collection will help us set Phil's work on Tékumel into the larger context.
HC: The parts of the collection reaching back before the 1970s sound particularly exciting. You mentioned the rules for that early domain-play game Barker was playing in the 1950s. What's in there that could possibly broaden our understanding of that history?
JB: The Codex Westfali is basically a campaign game for players who are running their own fiefdoms or mini-states. It's very much like what Diplomacy later became, or the campaigns of Tony Bath and Don Featherstone.
This is from the early 1950's, while Phil and his friends were grad students, and may predate all of the well-known examples. There's all sorts of stuff like this from the late 1950s and early 1960s, as well as very complete sets of rules from the early game companies.
This is why we're in what I call the “consolidation” phase, and why we're going through the boxes to see what else is lurking in there.
Posted by Chris Kutalik at 11:25 AM