The secret we should never let gamemasters interested in domain play know is that they don't need any rules.

Yes, that's a clumsy paraphrase of a likely apocryphal Gygax quote and, yes, it's hyperbole—role-playing games need some kind of rules structure to keep them from just slumping into amateur theater hour. (And yes there is much to use in later supplements and games digging into this realm-ruling realm—including my own Hill Cantons: Borderlands when it's tarrying rear sees the light of published day.)

But it's an exaggeration that amplifies a simple truth, you may already have more in your head and hands about how to run this then you realize. For one you the ultimate baseline: your own capacity to imagine a robust imaginary world and adjudicate on a situational basis. Though a victim of scatter-shot organization there is also the fact that a fairly substantive rules framework for domain-play in D&D was already in place as early as 1979--in two books that you likely already own.

Let's do some textual analysis of the explicit and implicit domain game lying in those lovable old hardbacks (coming again for an encore this summer). Here's part one mostly from what we can gather from the Players' Handbook (part two of this post deals with the smorgsborg scattered throughout the DMG). 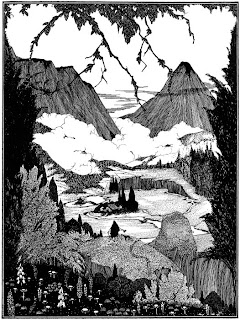 Different Classes, Different Domain Games
When you put together the various scattered paragraphs on higher level play you get a sense of a few overall themes (I will present a few more when we get to the DMG) that what class and race you are highly colors what you can as a charcter when you get to name level, enough that it feels like you have not just one domain game but several.

Only the three original core classes are able to “rule”. Only clerics, fighters, and magic-users are able to exert political authority enough to be able to squeeze income out of a local population. Furthermore they collect this revenue in varying amounts implying that the classes have different spheres of activity in the realm that can control.

There is an implied subtext I see in the terseness that the only beancounting that is important to AD&D domain ruling is knowing what the population of the land you control is and how much swag you can pull out of them.

Domain play does map neatly to name-level. Clerics begin in a limited way—they can build a temple and attract followers but not tax--right before name level at 8th level. On the other hand you have Magic Users who cannot build a stronghold and rule until 12th level, one after name level.

Ruling is for humans. Level-caps make it a humanocentric part of play for PCs. Only Dwarves with 18 STR and Half-Orcs can become name-level fighters. No PC demi-human can achieve a qualifying Cleric or Magic User level. So ruling is really left as far as PCs go to humans.

Class determines type of “stronghold.”
Clerics: At 8th level must build “a place of worship, a building of not less than 2,000 square feet in floor area with an altar, shrine, chapel, etc” to attract followers. At 9th level to rule they have the: “option of constructing a religious stronghold. This fortified place must contain a large temple, cathedral, or church of not less than 2500 square feet on the ground floor. It can be a castle, a monastery, an abbey or the like. It must be dedicated to the cleric's deity (or deities). The cost of construction will be only one-half the usual for such a place because of religious help.”

Fighters: Have freeholds which are “some type of castle” based in a cleared radius of 20-50 miles.

Magic-Users: Have strongholds based in a cleared radius of 10-20 miles.

Thieves: Cannot build strongholds (i.e. a building that serves as a seat of power) but can “build a tower or fortified building of the small castle type for their own safety; but this construction must be within, or not more than a mile distant from, a town or city.”

Assassins: Like thieves cannot build strongholds but can build guild headquarters when they reach 13th level and defeat the sitting guildmaster “the headquarters...is always within a large town or big city...It is typically a warehouse or other nondescript structure, with safeguards and traps added.”

However evocatively at 15th level, “the headquarters of the Grandfather of Assassins can be virtually anywhere and of any form--cavern, castle, monastery, palace, temple, you name it. However, if it is a large and obvious place, the headquarters must be located well away from all communities - such as in the midst of a murky woods, a dismal marsh or fen, a lonely moor, a deserted island, A remote coast, or far into forsaken hills or atop a mountain.”

Paladins: Beyond personnel costs they can only keep enough treasure “to construct or maintain a small castle.”

Monks: Can either steal or build one: “The monastery or monastery-like headquarters of the monk can be that of the character he or she defeated to attain 8th or higher level, or it can be a building specially constructed by the monk player character after attaining 8th or higher level. In the latter case, the monk may retain up to 250,000 gold pieces value in treasure in order to finance construction of the place.”

No Easy, Guaranteed “Endgame”
There is an implied style of play that often seems to crop up in OSR circles that domain-level play is either: (a) part of an automatic and assured process (you get the required level and poof); or (b) consitutes some kind of partial or full retirement. The AD&D domain game seems in its sparse detail to be about fighting your way up and fighting to maintain your position.

Indeed three classes—assassins, druids, and monks--have to literally do both. As they reach name level they must fight and defeat increasingly smaller circles of high-level characters (and presumably must be fielding the same from NPCs and other PCs) culminating in a single character of the highest level. No gentle coasting to oblivion there.

And even ruling for the three main classes implies a small-scale and intense experience. Only wilderness clearing—and constant vigilant patrolling--of a relatively small scale is mentioned at all. There is zero mention anywhere in the books of coasting into the higher and safer higher ranks of the nobility surrounded by a cast of tens of thousands of soldiers, retainers etc. There is a strong implication that you are right there at the edge of the howling wilds and you don't get out of that until you actually handover your character sheet to the DM.