Requirements: Can not be eligible to be a Monk, WIS or INT less than 10
Prime Requisite: CON
Hit Dice: d5
Maximum Level: 8

For Mad Mox, he who journeyed through the depths of Hell just to serve again a murderous and demented clown. Fuck yeah! 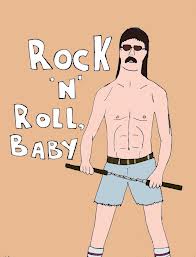 It is said by the sages that “clerics” are a martial lot that look outwardly for divine power and that a sub-class of those are “monks” who look inwardly for the same. But what is known only by men of science and the gentlest of birth is that that sub-class has its own sub-class of practitioners that look “nowhere and everywhere” for the source of power: the confused and puerile way of the Chaos Monk.

Chaos Monks may use no armor and often will eschew the wearing of shirts, doublets and other clothing that obscure their abs. The sheer force of will involved in the suspension of disbelief in following this path does however allow them to add a DEX bonus and a further AC bonus of +1 for each 2 levels of advancement.

Further they are restricted to a select (and somewhat lameish) range of weapons typically used by their more lawful and competent brethren or ninja-loving tweens of the early 80s: bo and jo sticks, nun-chucks (sic), clubs, man catchers, bowie knives, and throwing stars.

Chaos Monks are rarely surprised (a 1 on a d8) and then only if spoken to by a member of the opposite gender.

Due to the improbable nature of their powers, Chaos Monks are limited to only 8 levels of advancement. Further after the 5th level they may only advance by “kicking the asses” of an equal number of lower-level Chaos Monks to the level of advancement. (Low-level Chaos Monks as a consequent rule of thumb tend to avoid their higher-level equivalents like a bad case of scabies.)
Reaching 2nd level: a Chaos Monk may attempt a “kung-fu kick” in combat, a d5 attack that adds a +1 for each level attained.

Reaching 4th level: At 4th level, Chaos Monks can Flip over the back of their opponent while making a high-pitched scream.

Reaching 6th level: Chaos Monks gain the ability to cast Confusion once a day on not just themselves but others.

Reaching 8th level: Chaos Monks can use the Five Point Palm Exploding Heart Technique. It is unclear whether this has any real mechanical effect however.

Inexplicably they can be of any alignment.

Posted by Chris Kutalik at 4:14 PM