The Hill Cantrevs of Weirdain Mini-Campaign

One of my oldest and dearest fantasy influences is Lloyd Alexander's Chronicles of Prydain. The Prydain books were the first fantasy novels that I bought and read entirely on my own. Evanline Ness's expressionistic covers and strong, evocative black-and-white maps grabbed me and
Alexander's writing sealed the deal. I blew through all five books as quickly as the Troll Book Club could deliver them.

Though a few Prydain-influenced NPCs, subtly and not-so subtly-veiled, have crept into the home campaign (all hail Lord Gurgi, Master of Tables and the Hambone), I have been jonesing for an avenue to play around in the setting.

The recently released old school-ish Beyond the Wall--which explicitly nods its head to Alexander and another favorite Ursula LeGuin—ramped that desire up again. That BTW features at its core a fellow-traveller lifepath character generation to that of the Hill Cantons Compendium (and to some extent Feudal Anarchy) that evoke the archetypes and tropes of the best Young Adult fantasy of my distant youth is just gravy.

So here we go with another half-baked mini-campaign, 2/3rds Prydain and 1/3 of my own insanity. The players will be the callow youth of Commot Flaylsnaith a small village just over the Little Avern from the Free Commots in the scrubby, war-torn Hill Cantrevs (naturally). Rules expanded below will basically be By This Wall chargen and magic mashed into my old friend, first edition Stormbringer. 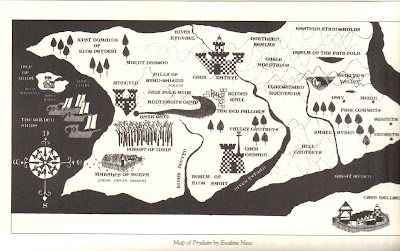 2. Roll 1d6+5 for each of your starting stats (note that POW will sub out for WIS). Roll 3d6 for SIZ. Don't sweat the low-seeming stats, you are going to get a buttload of bumps using the playbooks. Note that you don't roll for your starting class as per normal Stormbringer.

3. Pick one of the following Beyond the Wall playbooks:
Village Hero
Untested Thief
Witch's Prentice
Would Be Knight (in this case Cantrev lord's warrior)
Young Woodsman
Forgotten Child (available from the free Nobility supplement here.)
Nobleman's Wild Daughter (as above)

4. Add any modifiers to your stats as directed (maximum of 18). Yes, you will likely end up with much higher attributes than usual BTW (that's a consolation prize for sucking more than the normal SB character.) Hit points are SIZ + CON divided by 2.

5. When the Playbook directs you to add a skill, add +20% to an appropriate-looking SB skill. A Weapon Specialization or any other Combat skill for example would add 20% to a Weapon Skill, a craft/profession skill 20% to a similar Craft or Lore skill, etc. Ask me if you aren't sure what the equivalent would be. Give yourself two bonus +10% hikes on skills.

6. Take the starting equipment as outlined in each playbook. We will be using prices from BTW. Leather Armor is the same, while Chainmail is the same as Half-Plate in SB.

7. Magic will also as directed by BTW with my rough conversion of effects. Ignore Fortune Points (fortune favors the bold), Alignment and Initiative (it's by DEX as per SB).

So away we go aspiring pig-herds and petulant brats. Rumors and hooks coming next.

Posted by Chris Kutalik at 4:00 PM