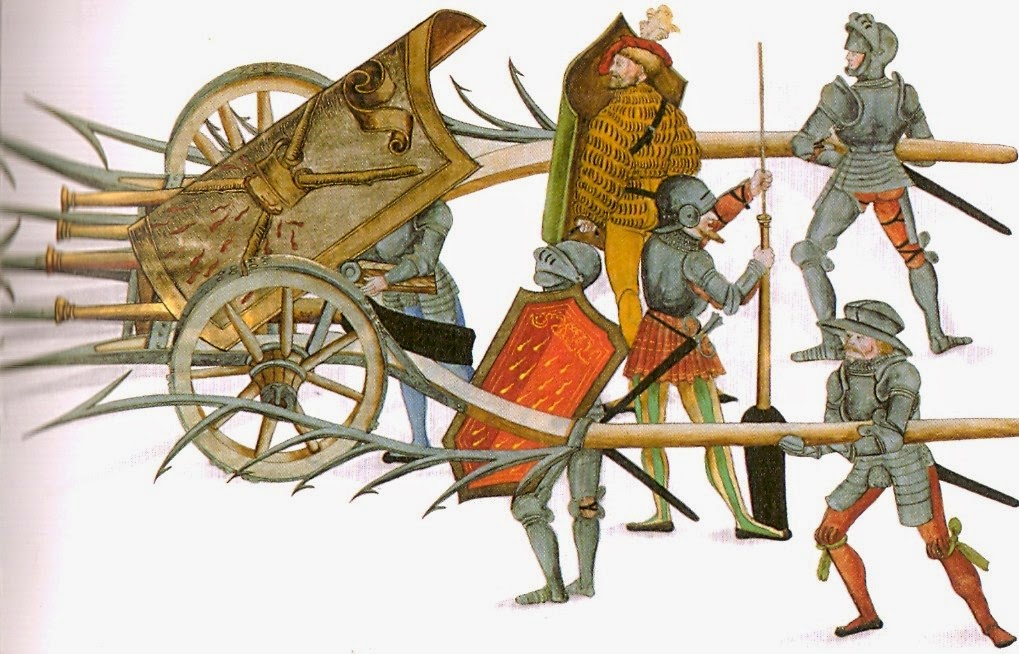 In every long-running sandbox campaign there comes a time (really many times) that the players run full tilt toward the undefined edge of your known world. An adventurous GM who likes surprises runs with this even if it means having to call a timeout while you hastily change the reel.

The Nefarious Nine made a break for the little-known land of Brazonia, a vestigial product of my attempt to run a wargames campaign with a great fine old wargamer/blogger. (This land, Himyar or the Scarlet Sultanate, came into focus the last time this happened.)

Brazonia
He says Hy-Brazos still runs muddy like she's run all along
There’s never been no cane to grind and the rye's all but gone.
-Dirt-Gnome Porch Ballad

What brought the loud-talking, tall-tale-loving, slate-skinned Sons and Daughters of Dahn, today's Brazonians, thundering across the World Canal from the Southeast Quarter three centuries ago no one alive today truly knows. Or perhaps it's just that no one really gives two ocular bat guano pellets about why, the Dahnii themselves included--a people so confused by the faulty mnemonic devices of their holy drunk-skalds that they seem only to care about the present and the mythic past-future.

What is know is that before their fearsome war-wagons rolled inexorably over the Trackless Wastes into the delicate civilized valley of the great Hy-Brasos River that the Dahnii lived grim horse warrior lives of not-quiet desperation in eternal conflict with the shadowy macronauts, star gliders, fell youngminds and other figures only hypothesized by men of science and reason.

At that time before the walked into the supernal light of our most Puissant Sun Lord, the Sons and Daughters worshiped in sweaty, mare milk-speckled yurts only the pagan Seven-Horse and their hero-founder Dahn. In that benighted time they were said to dwell on the fringes of the Forest of Copper never daring to enter having been chased by demons from the Forests of Gold and Silver respectively. On the edge of that dazzlingly-beautiful woodland, they swaggered and yelled and fought and loved and fought some more. 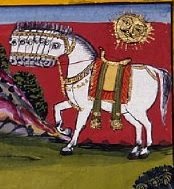 With their warlike ardor and an unholy love of obscure derivatives markets one could truly call them “barbarians” and not feel terribly behind the times. A point really only underscored by their crushing of the flourishing Hy-Brasos civilization, a secluded and achingly beautiful borderlands melange of cultures that tolerantly mixed glammer-slyphs, rose-cheeked dirt-gnomes, kuduk quarterlings, talking dogs and hardy Nemec missionary-pioneers of the Sun Lord.

In that timeless exchange of invigorating cultural exchange that marks History the Dahnii bestowed upon the valley inhabitants the gifts of death, peonage, horse-stew and junk bonds while the Hy-Brasosites gave them back religion and the clap. To this day the Dahnii-speaking Brazonian majority still feel cheated. 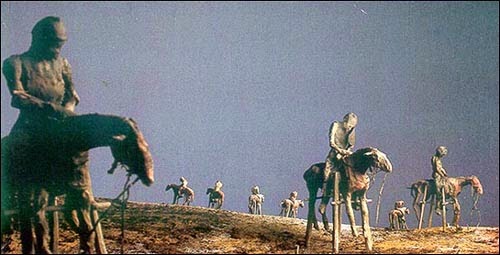 Today's Kingdom (or Empire to the locals) of Brazonia uneasily mixes features of what came before. The grays-skinned Dahnii have increasingly taken on the features of their subject peoples. Here a sturdy Dahnii burgomeister with balloon-nose and fondness for green peaked caps, there a fierce cavalry-leader with a penchant for glitter powder.

Local culture such as it is seems to have one foot in the refinements and baroque hierarchy of the Overkingdom, another still in the warlike horse nomad past. Thus in the city of Great Dahn grey-walled sundomes and townhouses that would be home in the Cantons vie across muddy avenues with bizarre Sunlord statutes lead by seven-headed horse teams, melancholic wee-people ghettos, and high-backed kurgans.
Posted by Chris Kutalik at 3:20 PM