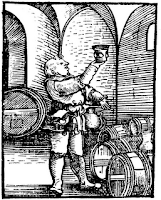 Designing new classes for D&D is tough work, as I have noted before. Balance is tricky. It's phenomenally easy to either design a character that upsets the delicate balance of the core archetypical classes—or one that feels rather lame or mundane in comparison.


When farting around with class-design myself, I keep wishing that there would be some kind of simple metric to help keep a class from floundering on either of those poles. Fortunately, Michael Curtis of the Society of Torch, Pole, and Rope pointed some time ago on his blog to an article in Dragon magazine #109 by Paul Montgomery Claburgh that laid out some guidelines to tricking out custom classes. Duly tracking it down late last week I was pleased to find a number of useful charts to help scratch my itch.


Note, like Michael, I have done some heavy modifications of my own to fit my own tastes. Some costs are a increased to protect the core classes; many other guidelines are simplified; and more specific detail for the meat of any custom class—special abilities and restrictions—are added.


Tomorrow I will spend some time talking about the non-mechanical backside of class creation such as creating a coherent concept; tailoring a class to pulp fantasy archetypes; experimenting with new special abilities; and the like.


Design Steps:
Draw up a class concept. What is the basic idea behind this class? What is this class capable of? What are the ability requirements? Prime requisites? Alignment restrictions?

Work your way with through the tables starting making choices that fit with your class concept. Tally up the various percentage amounts as you go.


Add the combined totals to a baseline cost of a 100 percent. Multiply the total to the baseline experience level for each level to get the final cost for level advancement.


Example: the Delver class has a combined percentage of 280%. This is added to the 100 base cost for a total of 380. This total percentage is multiplied against the baseline experience costs (500x3.8) for a grand total of 1,900 to progress to level 2. The cost for each level is doubled after this, 3,800 to progress to level 3 and so on down the line.