Introducing Mystery and Legend into a Sandbox Campaign, Part II 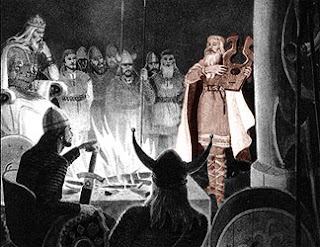 Picking up from my previous post...
What I do is this (HC players, again, “ear muffs”)...whenever I have the glimmer of an idea in a game or between sessions about a new event, NPC, object, locale, etc. I write it down on an index card. Side one is Bachmann's first layer (“Knowing only the topic, only that it exists”), usually a sentence or two like “with the waxing of the red moon this month, strange flying creatures with leathery wings may be seen with increasing frequency at night.”
On the second side I put layer two info (“Dictionary or atlas-level clues”) about the hook that a PC may either know or can casually pick up in town if she is interested such as “when the second moon is closing on full it is often noted that these creatures fill the skies. More and more of these critters have been noticed as of late.”
I then very deliberately file the card away and stop thinking about it. Note this NOT thinking about it is very important order to head off that too familiar impulse to over-create elements that will never be used that can drive a sandbox campaign GM bat-shit crazy (or turn him into a railroading bastard). It also allows me mental space to create lots and lots of potential little bits to bounce off—between sessions I often write at least 3-5 such cards--leaving me quite a stockpile over the past year of play.
Before each session I will often pore over the cards to see if the players are in a potential position to trigger any of them (if I remember a trigger may happen during the session). “So they are likely to be camping out in the hills on their way to the Slumbering Ursine Dunes,” I think. “So very likely that they would notice the red moon and said flying critters.” Pull the card and so on down the line with any more cards that may come into play this session.
If a card is pulled, time to figure out the next couple levels. Level three (“Increasingly detailed information, yet not enough to determine the truth or relevance”) “The creatures are the souls of the dead flying up from the Underworld from where unwitting adventurers unlock them from.” Which on level four (“clues allow a player to evaluate and judge the truth or relevance”) is “False. They are really flying mutant fungoids from the red moon proper.”
Does this whole process matter to the players on their way to and fro the dungeon they are looting? No, not unless they care themselves. If they digger deeper I will improvise the next steps or develop them in the week. If not I shrug and toss the card. Plenty more to pull from that stockpile.
Basically any number of “sub-plots” can develop, partially develop, or ignored completely if the party chooses to not follow them.


For example in the current campaign one point has developed quite far with layer after layer being pulled away with the mysterious Lady Szara, their duplicitous patron (a random-rolled encounter from an early town session). In their search to uncover the cursed green pearl (a fig leaf mission to justify exploration of the one of the HC's larger dungeons) the Lady has been uncovered to be a Strigoi, the OG vampire of southern Slavic myth with countless new plots and counter-plots underway with their ostensible new patron, The Stripped Mage.
By the way, here is the progression through the legend layers that Bachmann worked out for his own nifty example.

*2—It is in the east at the head of a great river;

*3—The inhabitants speak Wosish, are ruled by a King, have little contact with the outside world, and there is a beautiful princess living there;

*4—An old adventurer had been there, he tells that the inhabitants believed their King was mad, and he mentions that he remembers the King looking like John Doe Swordsman (a member of your party who does not know that he has a Doom);

*5—There is a rough map in the city archives made by the old adventurer after his journey, there is also a copy of a letter sent with an ambassador who did not return;

*6—There is no reply to the letter;

*7—Fifty miles from the City, a player will stumble over an ancient milestone which is overgrown, nearly illegible and seemingly in the middle of nowhere;

*8—Twenty-five miles from the City, a player will find a hermit who tells of the disarray of the City, disease, decline of the army, the absence of magic, and mentions the death of the King;

*9—In the City one hears of hopes for a new King, talk of despair, one sees work to be done, the Beautiful Princess has a chance to fall in love with John Doe Swordsman;

*10—The long lost ambassador is met, and the party learns the signs of the New King (most of them point to you-know-who)."