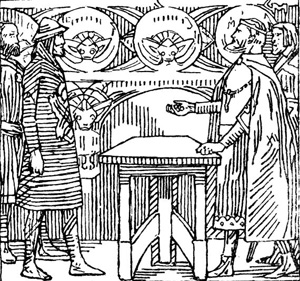 For going on about a decade now I have a had an on-again, off-again love/hate affair with an argument-based, free-form wargaming mechanic called the Engle Matrix game. Every few years it seems to pop back into my mind as something I wanted to introduce into a miniatures or cardboard wargame I was mulling over--only to just as quickly to be chucked.
As the manic lift-off of the Domain Game experiment in Nowhere rumbled on last week—and I scampered behind it trying to write seemingly numberless rules to match—the itch for a simple fallback mechanic to provide rulings for the thousand-plus “gray area” occasions invariably turned my head back.
Just to give you an idea of scale: 14 players are leading expeditions of over 100 with highly-detailed rosters down to the last chicken are carving out their domains in a blank-slate continent with 10,000 five-mile hexes, 400-plus different types of resources, tons of strange ruins/sites, and boatloads of exotic fauna/flora. With only about 11 pages of rules written up at this point, lots and lots of gray there in other words.
Let me step back some to give you a little background on what a matrix game actually is. Coined in 1988 by Chris Engle, owner of Hamster Press, matrix games were designed to create an open-ended way to resolve military campaigns and battles by use of a referee-adjudicated system of argument and counter-argument. While not an utterly new new concept in wargaming—that tradition of games reaches all the way back to how Kreigspiel was played at the end of the 19th century—it did create a more simple and elegant way to do so.
While such games can have varying levels of complexity or focus covering specific campaigns like the Norman Conquest or even role-playing games, at the heart of each is a simple conflict resolution system. In it's basic form, one side gives an “argument” about what they want to do based on what they know about their forces, the campaign environment, the opposing forces, etc. In some games an opponent is allowed to build a “counter argument”.
Each argument has an action, a result, and up to three reasons (supporting arguments). So thus in a turn you could say: “my vast horde of hedgehog-men can force march to the capital city five hours earlier than the Mauve Knights expect. They can do this because: (1) they are well rested after being in their burrow barracks all week; (2) hedgehog-men are tough cookies; and (3) the roads are well-maintained in this part of the Hedge Kingdom.”
The referee listens to the argument and decides on its relative soundness; comparing the argument to what he knows about the game world situation. He then throws a dice on a simple chart like the following for its success.
This system has many obvious advantages and it fits solidly with the wide-open, “rulings over rules” philosophy that I feel is the bedrock of classic play/old school rpgs.


Yet, I hesitate to embrace it as a core mechanic. In practice, I have seen tabletop play that relies too heavily on this for player options to ironically stagnate too quickly with players bouncing from a curious repetition (the paradox of choice?) to manic overdoses of increasingly absurd arguments as they get bored. In that way it mirrors many of the narrativist/story-telling rpgs that followed it in the next two decades.
Hand-wringing aside, as a fallback mechanic it's a wonderful last-ditch one. The emphasis on player skill/thought and the small amount of chance (that can add an element of beautiful chaos to the process) has a great appeal and I find myself quite often falling back on it my standing LL tabletop campaign.
With a great and rigorous set of players pumping out arguments by the page load, I see a glorious future ahead for it in the Domain Game.
Posted by Chris Kutalik at 9:52 AM