Peeking Under the Hood of the Domain Game Experiment 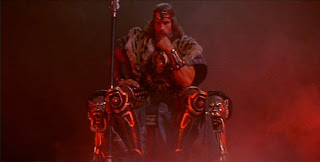 [Editor's Note: I inadvertently failed to cut and paste the fourth layer in my original post. Corrected in the text below.]

I continue to be amazed by the creative dimensions of the Domain Game experiment so far. The cultural background and detailed (and quirky) action write-ups are simply blowing me away, the 80-plus pages (!) of material produced by players is richly imaginative and providing a great launch for this project.
As I noted before I will be leaking from time to time more sneak peeks into how the game is evolving.
Today's reveal is of two things of possible interest to readers. The first is the working guidelines and outline that I am using to help shape the play test game. As it gets updated--and some serious flesh to the skeleton will be coming later this week as the list at the end gets completed--readers will be able to get some glimpses into the trajectory of the project. Read them here if you are interested .
The second you will find below and pertains more to the overall goals of the experiment—and the game aid supplement that will hopefully follow in its wake.
The Four Layers of the Domain Game
The supplement will be divided into four layers. Instead of lumping this kind of play into one uniform mechanic it will try and dig into how this area of the game can be played in very different ways according to the power scale and technological/political/cultural context of each campaign. Each layer will basically be posing different sets of questions and have suggestions for the kinds of mechanics and play that may help answer each.
Again the overall goal is to provide elements to spur and expand open-ended play as it “feels right”. Each layer of the supplement will also have two tracks GMs decide on how and what to adopt/change/modify for the particular conditions of their campaign: 1. a “rigorous” path with detailed sub-systems; and 2. a “lazy” path that provide suggestions on how to introduce play in a domain game as more of a back drop (suggestions to include how and what works best to hand wave).
The layers can be either custom-fitted to fill out one area in a campaign using one or more layers or if desired more in a linear fashion with characters moving up the layers and ranks as they gain power.
Layer One: Non-Ruler Domain Play
This layer is aimed at low-to-mid level characters. The given assumption for this layer is that players will not be rulers, but playing roles inside institutions that introduce them to this type of play. Here will go suggestions for exhaustive lists of hierarchies of various fantasy institutions and guidelines for how players can advance in them as part of the campaign.
Mechanically, emphasis will be on subsystems and mini-games that happen when primary domain decision making is “off stage”. En Garde and Heroes are inspirational sources here.
Layer Two: Entry-Level Domain Play
This layer will allow mid-to-name level characters a chance to be low-level decision makers or rulers. Emphasis here will be on large-scale exploration, wilderness clearing (or adaption), and laying the foundation for a new domain. (Our current play test is laser-beam focused on exploring the dimensions of this layer.)
Here we have an emphasis on a highly granular, direct (or command) decision making. Depending on which elements from this layer the GM and players feel comfortable with they will have hands-on decisions to make as they face the harsh conditions of founding an outpost.
Layer Three: Domain Play
This level focuses on play for small to mid-sized settled states typically for name-level players. If evolving out of the previous layer it's a wilderland becoming a borderlands area.
The micro-focus of the previous layer is shifted to new guidelines. Direct decision making questions like how to get your followers fed/clothed/housed or shifted to more indirect considerations where the domain residents are acting more as autonomous economic actors. Players will be less micro-managing their followers activity and more thinking of ways to tax, govern, and harness their productivity.
Similarly combat is becoming more large-scale with emphasis on mass battle rules over skirmish ones. Diplomacy, espionage, macro-trade and other considerations become more central arenas.


Layer Four: Worldgame Play
Here we get to the ruling of large-scale countries, planets, or planes of existences even. Domain management will become increasingly abstract and far-reaching as play extends out to this layer.
Posted by Chris Kutalik at 10:42 AM