Blurring the Line Between GM and Player 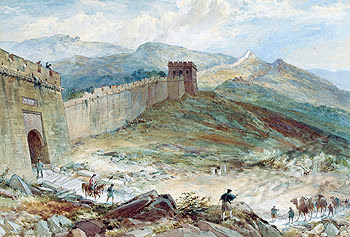 One of the standard conventions of modern role-playing is that a Chinese Wall must separate players from their gamemasters. Outside of some marginalia, no matter what generic or cornball title he is given, the GM is invariably described as the neutrally-adjudicating, virtually-omnipotent force behind the game world and the players as his primary cast of actors.
Was it always so?
Anyone who has been around the block a few times in this hobby knows there has always been some creep over that supposedly hard line. One of the most commonly encountered was the adversarial GM, the kind of killer ref who intentionally or unintentionally strayed over the line into being a virtual player by dint of his antagonism. This behavior just as invariably was a game-killer, and social conventions were thrown up earlier in the hobby's history prescribing it.
Other somewhat-less heinous examples persisted over time, such as the “DM's PC”: either a de facto one such as a much-too-beloved, virtually-indestructible NPC (think elderly, graying wizard here); or the more straightforward NPC that would double as the DM's PC when he passed the ref hat for a session. Controversy about such blur exists to this day.
While there seems to be a lasting and understandable grudge against transgressing the gamemaster-as-player line, I keep finding myself wondering if there may have been alternative, interesting paths for the player-as-gamemaster passed by—a feeling only compounded each time I run across an odd little transgression in an older rule set or campaign history.
Here's an example.
First edition Chivalry & Sorcery (and a huge thank you to HC player Brad for his generous help here) has a notoriously complicated system covering the latter half of its name. What it lacks in easy-to-grasp brevity, it makes up for in color and scope; and one of the more colorful elements is the reliance on the guild-like networks of the Magick Orders.
Here-in lies an interesting player-as-gamemaster blur:

The rules governing “Magick Orders” provides that the first player to have a character who is connected with some Magical Order or Society should design the whole organization. He must determine the number and level of Masters, Journeymen, Apprentices, servants, and monsters.

So far a larger amount of control of the game world being granted to a player then is the norm, but still a reasonably contained one, no? The clincher though is that sentence above is in the section called “Designing the Place of Mystery” (coding for a C&S dungeon or adventure site).
Note how the sorcerer player is now conceded primary design and control in this process:

He must then design a Guild Hall or other headquarters for the order by drawing the complex on large-squared graph paper...showing the various quarters, libraries, storerooms, and catacombs. Patrols are established, traps, and warning devices are set, etc. In short, the player designs a place of mystery...

The player is thus not just designing a piece of his background or a stronghold, but a primary target for adventure by other players. The section is all the more remarkable in that it goes on to detail five long points on rules governing how the player would design this “dungeon” objectively from the limits on numbers of men and monsters guarding the complex to how treasure and traps would be apportioned. One of the most awesome being this one:


To confound the lovers of secrecy, rumors abound in the game, and once each year the player Guilds must publish a list of all the major magick items and materials that exist within the confines of the place. A bit of lying is possible...

I have to admit I am still a little too stuck in our conventions to wrap my brain about how this would actually work at the game table. Does the designing player don the GM hat when his complex is raided or does he hand over his design notes to the presiding GM? Would this require a larger play group with a different (and opposing?) group of players or a larger open-world campaign with other sets of GMs and players? Or what?
I don't have the answers, but I sure am intrigued by it. And truth be told I have, like many others these days mucking around with the open edges of classical play, have already been unwittingly experimenting with some limited forms of this by encouraging co-creation with players both in the HC sandbox and the Domain Game.
How do we keep up opening up more of these doors? How do we make it work? Or should we even bother blurring this line again?
Posted by Chris Kutalik at 2:02 PM