How Empire of the Petal Throne Helped Birth German Roleplaying 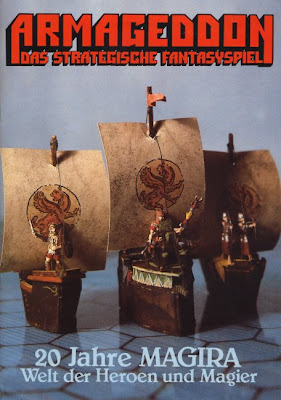 Yesterday, Irbyz threw out a tasty bit in his comments here about the worldgame Magira that can't be ignored by a Tekumelphile like me.
Magira is a complicated multi-layered business. First created as an open-world fantasy experiment in the 60s by the German-Austrian fantasy society FOLLOW (Fellowship of the Lords of the Lands of Wonder), it remains running in a diminished form to this day. Magira has been built in the imaginations of its thousands of participants in a crazy-quilt variety of ways: miniatures/board hybrid games like Armageddon, play-by-mail games, collective fiction, LARPs, costume play, and, yes, tabletop rpgs.

Indeed, I had read several times over that the worldgame didn't just spawn an entry into German-language role-playing, it spawned the first commercially-available German pen-and-paper rpg game. Arriving in 1981 as a thick 216-page manual, Midgard has chugged along up to the present through four editions. Like many second-generation American fantasy rpgs of that era the game has been described as evolving from a variant D&D into an increasingly more complicated system.
I had also read a few times in passing that M.A.R. Barker's Tekumel had had some influence on the Magira experiment and always assumed that this influence was in the world-building department. Much of the world's collective identity had been created by it's many players who had assumed commanding positions in the various player-founded imaginary nations. Most of these nations had stand-ins to real-world equivalents and like Barker, the influences of India and China prevailed over western European.
I was wrong.
Actually I was wrong twice over in my assumptions. I was wrong about Midgard being the first German rpg. Midgard's author, Jürgen Franke, it seems had released a small-circulation set of rules titled Empires of Magira in 1978 that should be awarded that distinction. 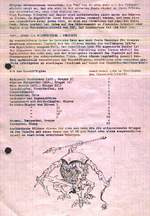 Turns out I was wrong too about Barker's influence. Empires of Magira wasn't just influenced by Empire of the Petal Throne's world-building, it was EPT. Literally.
At first glance, parsing through the garbling of a Google translation it looked to me like Franke had adopted a few rules from EPT here and there--percentile-based attributes, spell names, torch-bearing slaves, “eyes”, etc.--maybe even lifted a few Sutherland illustrations (see the EOM pages right). 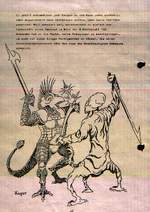 Noticing the handful of rule section numbers and their corresponding themes, I compared them to the original EPT rulebook. Sure enough they were all direct matches. In fact,  Franke didn't even bother to translate into German certain English terms like "hit dice" and "damage dice".


Seems EOM was basically that very thing a few small group of old schoolers have been kicking around recently, an EPT clone divorced from Tekumel.
Interestingly, Midgard (which separated itself from Magira in 1987) looks like it contains trace elements of its EPT origins, such as percentile attributes, to this day.
And that my friends is at least part of the story about how EPT wasn't just the first link in the chain of English-language Tekumel games, but helped spawn a lasting line of games on the other side of the pond.
A big hearty thank you to Irbyz/Harami/David for his yeoman's work in digging up this (and other) stuff in the first place.
Posted by Chris Kutalik at 12:59 PM