Do RPGs Have to Be Cooperative? 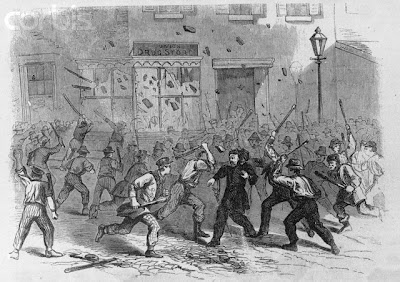 One of the shibboleths in the periodic debate over what constituted the first rpg is the notion that wargames are ruled out because of their competitive nature.
Indeed another of the enduring conventions of rpgs is that players operate cooperatively as a team to overcome obstacles. Sure there are the occasional diversions of intra-party conflict, the rivalries both in-character and external-personal sometimes brewing over into the killing of a PC.
(Lord knows, we had those diversions in spades as maladjusted pre-teen boys brimming with new-found testosterone.) In the main, though, this has held true for self-styled rpgs over the past three decades.
Like the social conventions that evolved to keep gamemasters from crossing the line into player functions, the team-cooperative idea also had solid reasons behind it. It allowed for more stable social dynamics and provided a refreshing departure from the constant direct competition of nearly every other game form (and this seemingly helped many spend greater times focusing on pushing their imaginations).
On the practical level, it allows a GM to focus on creating just one (or several closely-related) at-the-table game experiences rather than doing the tough work of relating separate double-blind (or many) experiences to competing players. I can tell you after spending two weeks writing out 14 different multi-page reports for players each grasping a different piece of the Domain Game elephant in Nowhere, this advantage can't be underestimated. 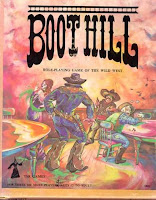 But again like the GM-player role division we picked away at yesterday, was this convention as nailed down in the role-playing of the 70s as much as most think? Were there potential departure points laden in the play and rules of that time?
Again I think the answer is a resounding “hell yeah”. In fact I would wager a guess that the possibility of running rpgs alternately as exercises in direct competition was there until fairly late in the 80s even.
Take two examples from TSR's second generation of rpgs: second-edition Boot Hill and first-edition Top Secret. Tucked away in the backs of the campaign sections of each of those games are some interesting alternative examples that presumably were kicked around in play-testing. (Traces of this kind of play disappeared in the editions that followed each game respectively.)
From the “Players” sections of the second fictional campaign scenario in Boot Hill:

The player groups should be divided into two basic groups—lawmen and outlaws. There can also be an assortment of prominent citizens—ranchers, businessmen and so forth...Characters on the side of law enforcement can take such roles as: county sheriff, town marshal, deputy, state ranger, or deputy marshal...Players opting to be outlaws start their own gangs by hiring non-player characters and/or by joining with other player characters of similar bent...Players who are other than lawmen or outlaws may have special individual goals as outlined privately by the gamemaster at the start of play (for instance, a prominent rancher may have an objective of gaining control of part of the county).

OK wow, so now instead of the singular cooperative team of players you have the possibility of not just one team-vs.-team layer, but several competitive player layers, to the campaign—a veritable return full circle to Major Wesley's Braunsteins.
The competitive aspect of this campaign gets further sharpened in the “Objective” section that follows down the page:

The objective of outlaw players is to be the first to accumulate $100,000 and safely escape from the area. The objective of the lawmen players is to be the one who garners the most reward money for capturing outlaws without being killed...A campaign run run to some predetermined time limit, or can simply keep on going...formal guidelines for winning should be discarded and each player simply best improve their individual position.

In other words, the campaign is open-ended enough that it can end when time runs out or one or more players wins (now how's that for a decisive ending point!). Alternately it can putter on in a sandbox mode.
Now let's take the “Multiple Administrators” section in Top Secret (remember that the Admin is the name of the game's GM):

It is quite feasible to set up a campaign where there are two or more Admins, each with a separate organization competing against the others. There must still be an overall coordinator, but the admins would handle all matters within their organizations. One such play-test campaign involved Eastern and Western intelligence operations in Europe, with a few independent adventurers (like wealthy industrialists) thrown in as players. The two Admins build their organizations without and knowledge of what the other was doing, and agents were assigned to steal plans, foment unrest, assassinate targets, etc. When the Coordinator noted two agents at the same locale simultaneously, the players were notified and the drama was played out...

Fascinating stuff, hunh? Here you have not just players in direct conflict but whole gaming groups competing complete with their own GMs (assuming at times a quasi-player roles) and one uber-ref in an open-world setting.
I didn't throw out both these examples as ways (just) to illustrate my navel-gazing of the day, but because they actually sound like they would be a great deal of fun. And again like yesterday, I haven't completely grasped all the practical ways one could make this work, but I would sure love to see what shakes out of such a stick-bending experiment.
Posted by Chris Kutalik at 11:35 AM