Revving Up a Petal Throne Mini-Boom on Google Plus

My cup seems to runneth over right now when it comes to that previously rarely-scratched gaming itch, Tekumel.
In fact in about a week’s time, thanks to the recent small wave of video-conferencing games on Google-Plus, I went from 0 to 60 in Petal Throne gaming.  (More accurately it was more like 15 to 60 if you throw in my limited activity in Humanspace Empires, the Shen expedition in the Domain Game’s Nowhere, and the scratching here on the blog, but why keep stretching metaphors.) 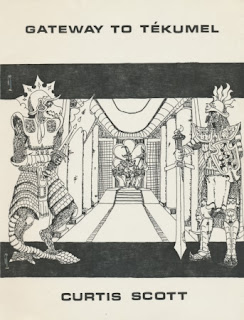 Right now we have a good kind of problem in this regards: too much demand and too little “supply”. When I put out an all-call last week I thought I might scrape together 2-5 players for an evening or two’s fun. I was a pleasantly surprised that within a day that we had nine people sign up, by a week’s time 21.
My usual more-the-merrier attitude is a bit challenged by Google’s technological—no matter what they claim you can’t accommodate more than four player/cameras at this time without things going bat-shit crazy. And there-in lies the rub, I have two parties already running now in my version of the Jakallan underworld—but that’s only accommodating eight slots. (One of our first party players, Jeremy Duncan, is organizing a third EPT outing of his own too.)
Rather than just turn people away, I’d rather take a stab at upping our “organizing capacity”: recruit more refs. Basically I am looking for 2-4 more people who want to GM EPT sessions in and around the usual Jakalla stomping grounds with the bog standard barbarians off the boat start. (Perhaps eventually we can even start coordinating the various sessions into some free-wheeling open world type action.)
We’re trying to use Victor Raymond’s introduction-by-careful-degrees approach, which I have found myself has dramatically ratcheted down the intimidation level for both players and GMs. If you’ve ever wanted to run your first stab at this setting, here’s your chance with a ready-made swarm of eager newbies.
Takers?
(In other news, when I get back from SoCal at the end of this week and have time to do them proper justice, two great interviews coming your way here--including an absolute blockbuster with one of our hobby's first pioneers, Rob Kuntz.)
Posted by Chris Kutalik at 2:27 PM