Again with the Dunes 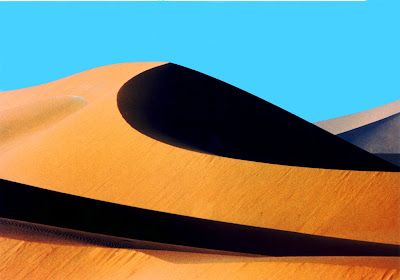 For the third time in as many weeks, the Google Plus wormhole has dumped a motley crew of scalawags, rogues, and hucksters into the Hill Cantons. Local savants opine that the fell land that spawns this carnival of mischief lies inside the Bizarro world borne on the shell of the Anti-World Turtle, but more worldly men care only for the mountains of swag and strange, rousing tales flowing back into these hilly borderlands.
Here you now of last night's tale from the journal of Ba Chim of the New Hampshire elves (as translated by the scholar of matters litigious Allandros):
Three days ago, as my wreckers and I prepared to wrest open the Third Sanctum of Riix, I mistook my footing and tumbled through a strange portal within the temple. Though I beheld it for but a second, it was glowing a pale azure and encrusted in runes of a particularly irritating magic.
Particularly irritating, in that I missed out on all the success that we would inevitably have enjoyed, for this portal stranded me in a dusty town Marlankh. I know not where Marlankh lies, for the sun shining down upon me is not that of my homelands.
Marlankh is a sprawling and decadent town. I arrived, along with a few others (victims of Riix as well?) in the center of town as their grand festival reached its apex. Grand chariot races, the losers to be hanged, the usual. After enjoying the ambiance of the festival for some time, I encountered a group of like-minded comrades, friendly in demeanor yet poor of purse.
We numbered five:
After brief consultation, we elected to band together and investigate a barge that The Slip told us of – bedecked in gold, abandoned and run aground, with its cargo ripe for taking. He had visited the barge before, but poor planning forced his group to withdraw without much success. We vowed to do better.
We made a brief stop to the Guild of Condotierre, Linkboys, Roustabouts and Stevedores to secure two assistants–a man at arms by the unlikely name of Ool, and a feckless linkboy whose name I cannot be bothered to recall. Having accomplished this, we journeyed onwards. After spending the night at the house of a rambling and foolish old man, we journeyed to a vast desert, which Manzafrain informed us was the Slumbering Ursine Dunes. The fabled golden barge lay beyond these dunes, only a few hours travel. 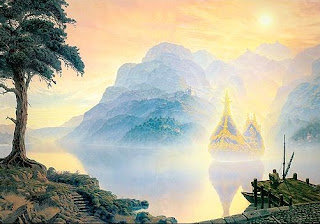 After an arduous journey, we reached the sea, encountering a majestic barge. Two wyvern-shaped prows flanked a vast ramp, which lay amidst the sands. The barge itself shimmered with a translucent gold material, and a series of onion-topped towers peeked above the barge’s deck.
Casting caution to the winds, we boarded the barge and opened one of the twin doors directly in front of us, leading to the first tower. These, and several other doors aboard the barge, were wrought in an ornate manner, with a wheel in the center of the door, serving as both lock and handle.
As we entered the tower, we found a tarry black substance coating the floor....
[Editor's Note: sadly dear reader, the following pages seem smeared with what looks to be tears, rendering portions unreadable.]
...this door led to a horrendous scene–a series of cadavers arranged as meat stood there, along with a large wok to prepare the flesh. Apparently the creature we had slain had chosen to “liberate” its victims in such a manner. Shuddering, Father Jack administered the rites of his strange deity (something called “Final Unction”) and we proceeded onwards...
...we entered another room nearby, housing a large pool of water in the center. Above the water, a long pipe was suspended, with a large claw housing a strange pearl at the end of the pipe, above the center of the pool. On the far side of the pipe, a brass lever lay at the level of the pipe.
The Slip compared the pearl above to the one embedded in his hand. Noting a distinct similarity, he concluded that he needed to acquire the gem. Climbing the pipe, he grasped the pearl and claw in one hand, while cutting away at the claw with his blade. Severing the claw, he climbed down. As the Slip had been doing this, we had noticed movement in the water below–a vicious beast of some sort. We tossed items into the water to attract its attention away from the Slip, and distracted it while he returned to the ground.
Yet we had not investigated what function the lever played. I urged my compatriots to trigger it, and they acquiesced. Glory to the swirling Entropy! All such opportunities must be seized. Throwing my grappling hook up, I pulled the switch down, and heard a vast commotion, as though a mechanical contrivance had begun to wreak its havoc.
The water in the center of the room began to rise rapidly, and I exited in a similarly alacritous fashion. After sealing the door to the room, we daubed it with pitch. Our man-at-arms then inscribed a message in ancient Hyperborean instructing others to leave the door shut. O, fortunate that we did these things!
After this successful enterprise, we explored further onwards, finding a room with an ornately carved wooden floor. Disquieted by the floor and its intricate depiction of worms writhing beneath our feet, we nonetheless rejoiced in the comfortable pillows present there. Taurus shot one.
At this point my head began to swim–perhaps a result of the strenuous climb we had made earlier in the day. I cannot tell exactly what transpired next, but when I came to, I was quickly informed that four other gel-covered skeletons had approached, and that silver-tongued Manzafrain had lured them towards the now completely flooded chamber, promising them that beyond lay great quantities of flesh to be liberated.
After speaking glibly and quickly, the mountebank convinced the creatures to open the door. The resulting flood into the corridor allowed the strange vicious beast to devour half the abominations before the remaining two forced the door closed and resealed the hatch. During this time, the mountebank had fled, seeking to avoid the wrath of the remaining creatures while they were distracted.
Angered by the death of their fellows, the abominations charged towards us. I held the line with Taurus and our man-at-arms, while the Slip quietly emerged behind the charging foes and eviscerated one of them while it was distracted. Meanwhile, Father Jack, in a drunken stupor, threw pillows, hoping to entangle the creatures’ feet.
After a brief melee, the remaining creature was dispatched. As the sun was setting, we merely explored a single further room, discovering a chest of ancient silver. Buoyed by our success and noting the waning hours of the day, we withdrew from the barge, but vowed to return and secure its wealth for our own.
And then we had to climb those dunes again.
Posted by Chris Kutalik at 10:50 AM