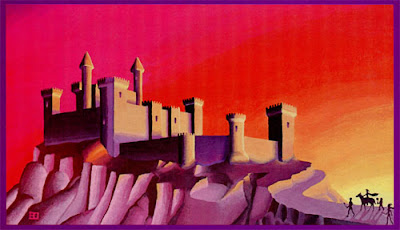 “The Realm of mankind is narrow and constricted. Always the forces of Chaos press upon its borders, seeking to enslave its populace, rape its riches, and steal its treasures. If it were not for a stout few, many in the Realm would indeed fall prey to the evil which surrounds them. Yet, there are always certain exceptional and brave members of humanity, as well as similar individuals among its allies--dwarves, elves, and halflings--who rise above the common level and join battle to stave off the darkness which would otherwise overwhelm the land.
Bold adventurers from the Realm set off for the Borderlands to seek their fortune. It is these adventurers who, provided they survive the challenge, carry the battle to the enemy. Such adventurers meet the forces of Chaos in a testing ground where only the fittest will return to relate the tale.”
The first words I ever read in connection with a roleplaying game. Thanks Gary.

And while we are on about the Keep, check out HC player Desert Scribe's statting out of the Keep and Caves of Chaos forces for Hordes of the Things.
Posted by Chris Kutalik at 2:17 PM