This is a riff. My friend, Brad of Skull Crushing for Great Justice notoriety, has a funny and insightful post up about his first brush playing D&D as a lad. Like most of us who learned this strange new world from scratch, his game was a total wide-open (and virtually diceless) Wild West.
Reading through his post I started having sudden flashbacks to my own old war stories. What follows is a grown-up rules “emulation” of how we kicked it San Fernando Valley Y-Camp style back in hoary days of 1980. (Oh yes, sorely tempted to play this as the house rules for a mini-campaign, I am.)
Summer Camp DnD
Rules sets:
Holmes blue box Basic D&D (preferably bought at the end of 1979). However there is only a 30 percent chance that any given rule will be remembered. Even if remembered you must flip a coin. Heads the rules is grossly distorted in interpretation, tails only a minor distortion.
Supplementary rule book: Pick at random a book from first edition AD&D (preferably borrowed from an older sibling or bought with money from mowing your neighbor's yard). As above except there is only a 10 percent chance of remembering said rule.
Player Class:
Players roll 3d6 in order with a single die stolen from the camp Parchessi set. A player is encouraged by an unwritten social compact to cheat and say at least one roll was a 17 or 18. Players can continue to try and hide the die rolls with a cupped hand or drop a die with the face upward to a 6 at a short distance—if called on cheating though by the DM the player must start again.
Players are only allowed to start as one of the three “bitchin” or “rad” classes: fighting men, thieves, and elf fighting man/magic-user. Magic Users, Clerks, and others of the “lame” classes (especially halflings) can be only played after a summer worth of fun has been squeezed after the former classes. A dwarf can be played if you are grumpy, hard to ridicule, or one of the older kids.
Elves must wear green pointy hats, but make up for it by being able to cast clerk and magic-user spells. Unfortunately since no one really understands how they level up, it's entirely likely they won't get past first level.
Alignment:
Alignment for reasons possibly derived from half-digested paragraphs in the Keep on the Borderlands, is designated as two separate terms. Fortunately, no one in your play group can make heads or tails between the behavioral difference of say a Lawful and Good Blink Dog and a Chaotic and Evil Chimera as laid out in the Holmes five-fold chart, so it's all the same anyway.
Character Death: 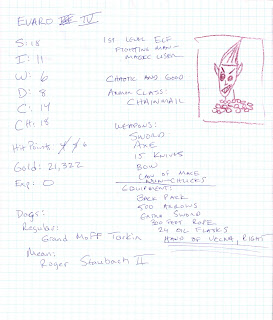 Dead PCs are survived by their younger brother who always, always bears the same name as the deceased character with a Roman numeral to designate their difference. The new PC gets all of the stiff's stuff--unless his asshole friends steals it all. See recreation of a period character sheet to the right,
The only exception is for a character who “sucks” (i.e. he had crappy attributes or starting cash because the player was caught fudging). In this case, the player can pick a name and new class and roll a new character. His friends still get to steal his stuff.
Equipment and Weapons:
Any number of weapons can be carried by a player. In fact your peers will think more highly of you if you can enumerate in great detail exactly where you have your 15 knives attached to your body. Ninja weapons are admissible if you win the argument with the DM.
Dungeoneers are advised to always go with the backpack over the sack. Sacks are easier to define in carrying capacity by a suddenly nitpicky DM, while backpacks are invariably infinite in what they can carry. Also any object you need will be instantly near the mouth of the backpack when needed.
Dogs:
Dogs are an essential component of every dungeon party. Regular dogs cost 20 gp, mean dogs 50. Regular dogs can carry a small treasure strapped to their back; mean dogs can have a spear strapped to their's which can skewer monsters when they charge into battle.
Dogs can be doused with flaming oil and set into a room, instantly killing all monsters (thanks, Dad).
Next up in our trip back to 1980: “Summer Camp DnD: Mechanics of Play, Dungeon Design, and Other DM Stuff”
Posted by Chris Kutalik at 6:13 PM