Jim Roslof, the Kalevala and Inspiration

Before I put up the playtest report for our Humanspace Empires game Friday night, I thought it'd be fitting to do a tribute to Jim Roslof, the renowned TSR artist that just left our ranks.

Most everyone and their proverbial dog will be posting something about his passing today—with the requisite greatest hits selections like the cover piece for the Keep—so I will keep this one short, personal, and focused on something perhaps a little off the beaten track: his work on the Finnish Mythos chapter in the Deities and Demigods book.
Like undoubtedly many of the Generation X “D&D boom”, my first two years spent playing the game were blissfully ignorant spent without any real gods, religions, mythologies, or other cultural/political clap trap. (Remember back when even Greyhawk had no real deities other than some vague mentions of a Northumbrian saint and some funky, quasi-Lovecraftian elder ones?)
The world-building bug hit me hard as I rolled into adolescence and I suddenly found myself hungry for whole constellations of such things in my game.
With eager hands I picked up a copy of the newly minted DDG rolled out by TSR—and was left a little disappointed by the mostly real-world entries (the others launched many ships in my reading world, but that's another story).

Having been immersed in your standard range of children's mythology books with their heavy emphasis on the Big Two (Greco-Roman and Norse) I was especially disappointed that there wasn't much there that I hadn't already known myself—with the big exception of the Finnish chapter. 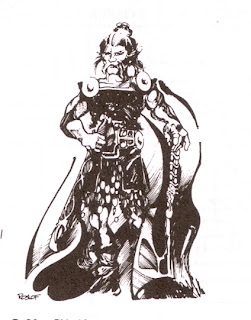 The chapter itself on it's own I would have likely just skipped right over mentally, but for those exotic-feeling illustrations by Roslof. The best gaming art really should do that, pull you into some someplace else, fire you up with that vision, and make you want to go out and create something of your own. His work did.
By the end of the afternoon I had found a dusty copy of the Finnish epic cycle the Kalevala and starting writing down ideas in a fresh new notebook. One idea after another came and before the end of the week my home campaign had founding myths, ballads of epic heroes, dark boreal forests, and lo and behold gods and religion--many of which were still attached to those black-and-white drawings in my mind's eye. The inkling of that terrible urge for depth had begun.
Thanks a lot Jim.

[Editor's Note: Condolences for Jim Rosolf's family and friends can be sent online here.]
Posted by Chris Kutalik at 10:42 AM