How to “Awesome Up” Fantasy Maps

Roger hit on an important distinction in the discussion yesterday about what makes a great map great:

“ The difference for me can be summed up by how much the map uses iconic versus symbolic representation. (Crash course in semiotics: iconic = using a picture of the object represented; symbolic = using a stand-in that doesn't look like the object)
I think you'll find the best maps use iconic elements a lot--the hand-drawn mountains and trees in the Greyhawk and Glorantha maps, for example. Put another way, the Greyhawk map would have come out even cooler if the cities were hex-filling skyline icons a la Divine Right, don't you think?”

Yes, actually I do. There is something much more compelling about the use of iconic imagery that is readily obvious when you train your eye on visual examples.
First, let's take a gander at another contrast handily provided by the terrain symbols chart in the back of the Expert booklet of the B/X flavor of Basic D&D (it will help to click on many of these pictures to get the full effect): 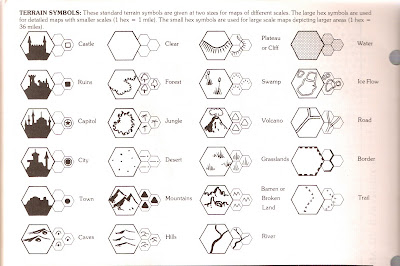 
Now, let's go back to Roger's example, to see if he is on target.
Greyhawk: 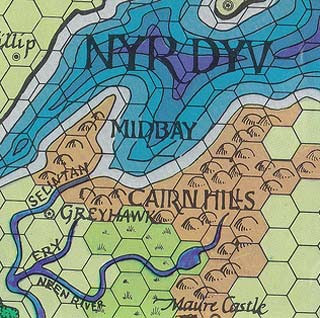 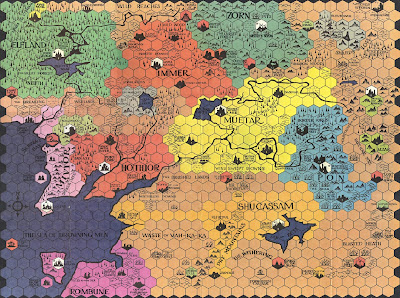 My own gut calls it a slam-dunk and I would hazard a guess that many of you do too. So why isn't this technique used more in rpg maps?
I mean seriously, take even my five top-picked maps. I won't budge from calling them great maps, but they do pass up some opportunities from real-life map-making to make them even greater.
Historical maps, for instance, made heavy use of iconic whimsy. They often didn't merely depict terrain but added little drawings of ships, critters, people, coats of arms, icebergs, etc. Here's an example from a 16th-century Scandinavian map: 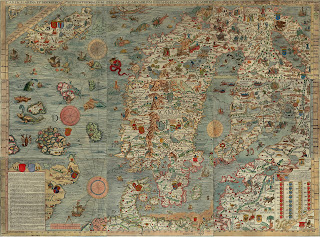 Beyond those touches of whimsy why not introduce even more robust and diverse examples of terrain iconography. Here are two examples taken from the beautiful work of the Hungarian-American cartographer Erwin Raisz: 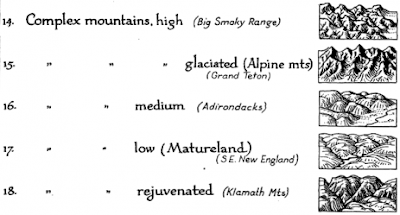 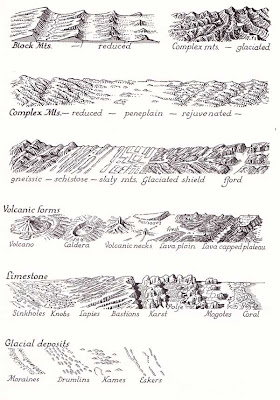 Note how much mileage he gets out of granular distinctions. Now imagine that on a map near you.
Awesome, no?
Posted by Chris Kutalik at 10:29 AM