The Cantons in Spaaaace 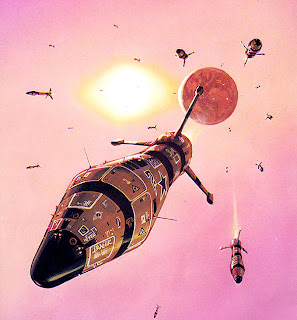 I have been trying to resist the space opera bug for months now—Jeff Rients' Traveller Leviathan campaign reports just made matters much worse.

Starting today at 8:30 I will be running an on-again, off-again Classic Traveller mini-campaign on Google Plus.

The mini-campaign takes place on the outer edge of the Cantonment, a distant-future confederation of 31 worlds. The Cantonment has mysteriously just emerged from the confines of a pocket universe it was shoved into (just as mysteriously) five centuries ago to find it has been shoved to another spiral arm of the galaxy.

All around it is the yawning darkness of unexplored space.

The coreworlds of the Cantonment are in sad shape for confronting this development. An inward malaise and weariness has set in the long years of splendid isolation. Endless rounds of flower wars, ponzi schemes, financial collapses, feuds, peccadillos, insurrections, and the like have wracked the confederacy leaving its central government weak and inert.

But some are stepping forward to face outwardly into the stars. Grasping corporations, ambitious planetary radas (councils), and now even spunky little “bolos” (small, cooperatively-owned outfits leftover from the Autonome Upheaval) are outfitting their own ships.

You are one such bolo. Pooling your savings and pensions from your years in service you have purchased a 200-ton Stormchild-class Space Xebec (pictured above and statted below). The ship only crews six and your bolo is larger, so expect some rotation (cue the in-game excuse for rotating player composition). You start on the edge of known space at a squalid, little planet called Outpost Nine (0801 Outpost Nine C446353-9 Non-Industrial).

A small detail, you still owe payments on the ship. Every six months for the next 20 years you must pay 300,000 cr—or you are going to make the repo list pretty damn quick. And the life of a space repo man is always intense. 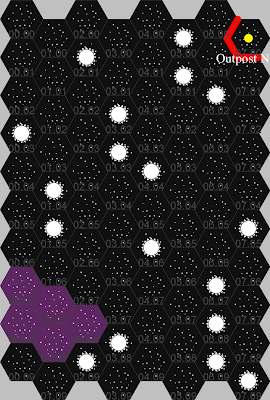 House Rules
1. We will be using the three LBBs and the Citizens of the Imperium for character generation. Any number of terms are acceptable.

2. Failure to meet a survival roll in chargen gives you the choice between “cake” (-1 to one of the first three stats and forced discharge from service with no skills/benefits for that term, add two years to your age) or “death”.

3. Any melee weapon can be bought in a suped-up version that cuts all to hit modifiers against armor in half (rounding down). Such weapons cost three times the normal price. Feel free to add “vibro”, “chain”, “power”, or what to the name of it to sex it on up.