Diary of an AD&D Wandering Monster 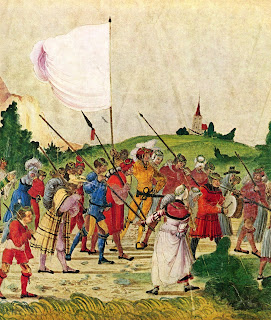 Patchwall 1, 576
Sweet screamin' Yeenohu, graduated from the Rel Astra School of Hermetic Iridology today! Drank a whole case of Velunian brandy and ate a cold fowl with the guys before our silver ran out. Lucky I sobered up before the sun went down, because man does the city get all kinds of cuh-razy what with all the slovenly trulls, press gangs, spectres, and were-tigers running around.

Patchwall 2, 576
Should have listened to my mom about remaining 0-level, because now I just have this crappy degree and normal man status to my name. With saves like this, what am I going to do?

Ready'reat 5, 576
Career path here I come. I was milling around the Old Quarter when a buff man in ring mail carrying a glaive-guisarme picked me out of the crowd and told me I was just the kind of dude he needed for his band of 20-200 “reclamation experts”. He assured me that his band was strictly neutral and that they didn't go in for that “chaotic evil brigandry kind of stuff” so I said “fuck yeah.”

He told me I need to bundle up my gear and hump it as they needed to get out pdq on account of the great need for normal men in the Inhabited And/or Patrolled Areas--especially those with Temperate and Sub-Tropical Conditions and all.

Ready'reat 6, 576
Did I luck out signing up with these guys. As I was shipping out I noticed a gang of crazy fuckers with beards. I was desperate enough I would have joined them and today I'd be running around barefoot screaming my head off with two weapons in each hand instead of getting my nice shiny new suit of boiled leather, light crossbow, and 2-8 gold pieces.

These dudes are a class act too. Not only is the boss a Lord but his lieutenant is a Champion. Both of them could fall 60 feet without dying! Sarge told me that we have a one in four chance of being joined Enchanter, Warlock, or Sorcerer too if we get lucky!

Sunsebb 11, 576
Tough month, diary. It was cool when we just sat around that informal camp and all, but we have been marching up and down the countryside for like four weeks. That last patch of Uninhabited/Wilderness Areas was totally off the chain!

Sarge says we're looking for a cave complex with a secret entrance or a small castle, but I was like “good luck”.

Fireseek 8, 577
I doubted it, but we found a totally stupendous underground lair underneath this ruined abbey. This place extends for miles and has like scythe traps, trapezoidal rooms, tons of branching passages, and shit.

Sucks Dispater's hairy balls though because Sarge has broken us up into small groups and we have to march around the first level in ten-minute intervals. We can't even enter the levels below.

Fireseek 11, 577
Those bullywugs we keep bumping into are total dicks!
Posted by Chris Kutalik at 11:13 AM