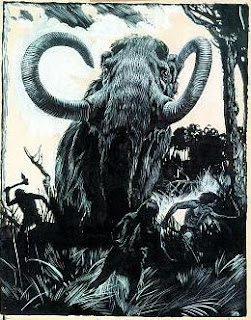 Though colloquially called “zomabastodons” by feckless wags who care not for life and limb, the Mammut Morbidium is a reanimated spirit-demon of the more mundane mastodon.

It is said that Kostej the Deathless himself had a hand in the base sorcery that first revivicated the lifeless corpses of the wooly elephantine pack animals so very much beloved by the northern rump-states of the Hyperboreans in the long glacial age that ended their civilization.

Whatever their origin, Zombastodons have been imbued with a relentless fury at two-legged mammals--and a cold, undying semi-intelligence to sustain that rage over the centuries. They appear as shattered shells of their former robustness, mangy hide splitting, exposed rib bones, and a demonic red glow to their eyes.

Zombastodons have the same range of magical protections as do the more human-appearing undead. They can be turned by clerics as per their hit dice (or as “vampires” in some systems).

Though their tusks are somewhat desiccated and gnarled by the ravages of time, each tusk is still able to fetch 1d4 x 100 gp from collectors of curios and the arcane.
Posted by Chris Kutalik at 11:54 AM