Update and some exciting news (for us in the hills at any rate) coming this evening or tomorrow morning about the South Texas Minicon August 18th. For now here is more setting info, house rules (full PDF), and theme music for players and voyeurs of the Space Cantons Traveller mini-campaign now going into its second exploratory mission into the cosmic weird Thursday night.


Theme music in keeping with the 70s-trip space opera aesthetic.

Experience. After every session, any surviving character can opt to make a check to acquire a 0-level skill. If there was none directly used in the adventure roll 2d6, on a roll of 10+ (+1 if INT or EDU over 9+) the character can pick any skill. The player can add +4 to the check if rolling for a specific skill in an unranked skill that he/she used in the adventure (actual success/failure is irrelevant). Example: Mongo X decided to try and rewire the ship's console in the adventure (for God knows what reason). He opts to try and take Elec-0 as a skill and adds 4 to his dice roll.

Advanced Skills. Skills from Books 4 and 5 can be learned at 0-level for a training cost of 10,000 CR. This includes: Interrogation, Hunting, Survival, Ship Tactics, Zero G combat, Demolition, Air Vehicle, Water Vehicle, and Prospecting. Composite gun skills from Book 4 can be learned at 0-level for 50,000 CR such as Combat Rifleman, Pistols, Lasers (includes blasters), and Zero-G. Composite melee weapons skills can be taken at 30,000 CR: small blades, blunt weapons, long blades, and polearms.

Cerebral Implants and Neurostimulators. Learn a skill-1 of your choice for 100,000 CR. The procedure can only be used twice lest your brain explode. 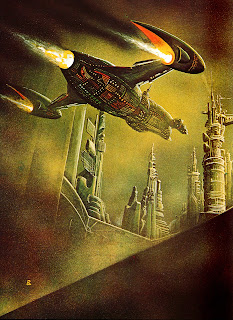 Known Players. Beyond your bolo, there are a number of local factions or individuals who are interested in your findings beyond the Weird:
1. The Spacers Guild
2. Sekifran the Solicitor. Eccentric collector of antiques and curios. High-powered big-shot trial lawyer who's trademark signature is his striped ascots.
3. Three-Eyed Jac. Local underworld boss. Doesn't have a third eye.
4. The Hermetic College of Nova Marlankh. Offworld university interested in findings.
5. Outpost Nine Rada. The local planetary government.
6. Hydra Corp. A conglom, large family-owned industrial “fiefdoms”, based off-world but with a branch “holdfort” in Outpost Nine

Jump 2 Away:
Nova Marlankh B5658A8-B G
Terra-formed world ruled by the loving yet firm hand of the Indomitable Overlord.