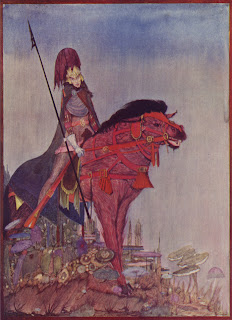 
Strange is the name of that ancient race, the Eldur. The tight-lipped followers of the Silent God are said to have coined the word, though its meaning “where a God resides” puzzles savants and sages throughout the Cantons to this day. Perhaps there is truth in the old folk tales of them as pitiless eaters of a long-forgotten deity or perhaps it involves another of that race's arcane cruel jokes.

Hailing from beyond the Veil that hangs between our world and the dark, fell place where life runs on rigid iron rails along great and horrible paths of adventure, the Eldur (often just called the Eld) are said to rule over vast estate piled high with tower-manses, monoliths, slave pens, protein vats and baroque, gargantuan gleaming metal vessel-machines

In this world the few who have witnessed—and survived--their incursions note that their appearance rarely seems by chance they invariably are seen performing strange, determined missions in the furthest corners of the Weird.

What moves their constant machinations inside of machinations little is known, but reports do consistently match up around their physical appearance: pale-whitish skin, long backward sloping skulls, delicate digits; and heights ranging around seven feet. They also favor bright single colors and enameled armor.

The Eld heavily favor long, ultra-slender sabres; short, nastily-barbed stabbing swords; and elaborately-flourished pole arms. Expert craftsmanship gives such weapons +1 to damage. There is a 25% that each group encountered over seven in number, that one of the Eld encountered will carry a piece of eldritch technology such as a Tube of Integument, Mindbox, or Interfogulator (see the upcoming Roustabout's Guide to the Hill Cantons).

All Eld are immune to the effects of sleep, charm, suggestion, and acid-based attacks.


Inspired, in part, by these guys and these and a few others that will remain vaguely mysterious to keep the players guessing.
Posted by Chris Kutalik at 2:30 PM